You should run for office

Some of you may have received an email today asking you to run for office - we weren't joking. Read the email that went out to our members today, calling on all of you to actively create change through local elections: 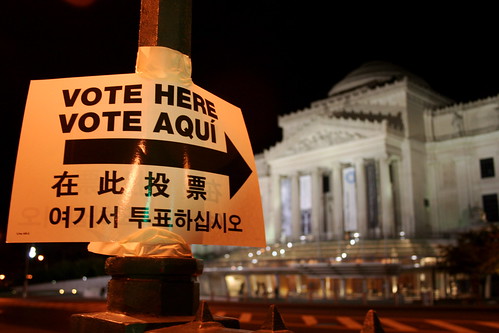 You should run for office!

No, this is not a joke. If we are serious about saving the American Dream, we need to fight for it from the outside. But we need true champions on the inside too. You can start local: school board, community board, zoning board, water commission. There are more than 500,000 elected offices across this country.

You don't have to do it alone. We're going to run as a movement and help each other—just like the tea party did (but without all that yucky fear-mongering). It will be fun. The right wing has been building a "farm team" for decades to catapult their leaders from places like the Wasilla School Board to the national stage. Now it's our turn.

We're partnering with Progressive Majority's "Run for America," New Organizing Institute's Candidate Project, and other allies to recruit more than 2,000 candidates like you to run for local office this year.

Will you—yes, YOU—be part of a new generation of progressive candidates?

Yes—I want to run for local office, or help others run.

Sounds interesting—I'd like to learn more about the project first.

I know. You've never seen yourself running for office. But that's exactly why you are the type of person who should run. Here's a challenge: Find us someone better than you. Help them run. Or maybe you can both run together.

We can't all sit on the sidelines while the "dream killers" wreck our country. There is a new wave of energy behind the 99% of us who want real change. We deserve a seat at the table. And as we knock on doors and talk to our neighbors, we will inspire our communities to vote and elect progressives up the ticket as well.

I'm in! I'd like to run for local office, or help others in my community run.

Sounds interesting—I'd like to learn more about the project first.

Thank you for being a part of, and believing in, this movement.