After Wisconsin this spring, Ohio has become ground zero in the nation's war for an economy that works for all of us. Read Van Jones for Huffington Post on the anti-labor battle in Ohio: 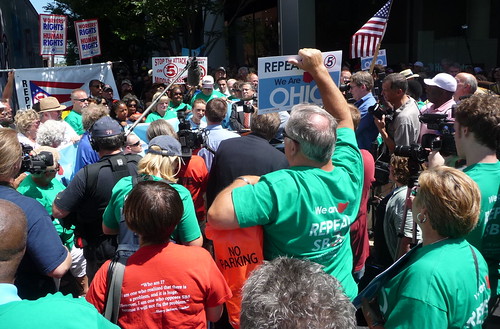 In the first major election since Occupy Wall Street swept the nation, Ohioans have a chance on Tuesday to repeal draconian restrictions on labor rights. A victory for the "No on 2" forces would mark the first sign that the new upsurge in progressive energy is capable of impacting electoral outcomes.

If you are in Ohio or can get there today or tomorrow, the good folks fighting for repeal could really use your help on the ground right now.

Extreme right-wing Gov. John Kasich and conservatives in the Ohio legislature passed an anti-labor bill in the spring which destroyed collective bargaining rights for the state's public workers. It would jeopardize the pay, benefits and even jobs of thousands of Ohioans. Together with Kasich's budget, the offensive legislation would cut 51,000 jobs in the state. Instead of finding ways to help Ohioans in hard times, the Kasich crew is finding new ways to cut jobs.

Victory is essential. It would demonstrate that progressives and labor can repudiate and punish Tea Party overreach - in an electorally important swing state. It would show that the partially successful recalls in Wisconsin were a part of a general move away from GOP extremism. And it would offer proof that newly-energized progressives are willing to occupy public parks - and ballot booths, too.

We know that our opponents are sweating bullets about this race. At the last minute, shadowy corporate forces have stepped in to dump in millions of dollars to pass.

It's no secret why. They've delivered body blows to labor rights and restrictions on Wall Street over the last generation. Their wealth has risen exponentially over the last decade, while at the same time, middle class incomes have shrunk. They need to win in this key battleground state to keep the ball rolling.

But the gig is up. Millions of Americans have seen the awful outcome of policies that benefit the top 1 percent, at the expense of the rest of us. Now we want to return to our grandparents' wisdom: in the wake of the Great Depression, they passed major labor reforms that allowed men and women to collectively bargain for better pay and working conditions. Our forebears also passed major financial reforms to keep speculators and big Wall Street firms from ripping off average investors and entrepreneurs. Those two reforms helped American build the greatest middle class that the world has ever seen.

If Ohio repeals Senate Bill 5 by voting "No on Issue 2" on Tuesday, the victory will validate the thousands who rallied at the state capitol in Wisconsin in February, the hundreds of thousands who rallied against austerity in every congressional district over the summer, and the inspirational crowds who gather every day at Zuccotti Park and Occupy sites around the country.

More importantly, we take a step toward recovering our grandparents' wisdom - and rebuilding the American Dream.