No massive oil spill is currently lapping against the Gulf shore, but Americans still are unhappy about expanded offshore drilling. In coastal regions around the country, thousands rallied this weekend against offshore drilling and for a shift to clean, renewable energy. Begun as a grassroots response to proposals to expand offshore drilling around Florida,  the massive BP oil spill last summer accelerated interest in Hands Across the Sand. The sponsor list grew to include traditional environmental groups like the Sierra Club, new climate change opponents like 1Sky and 350.org, and recreational groups like the Surfrider Foundation, and thousands rallied on beaches last summer. This year, despite the absence of a major oil spill from the headlines, thousands of concerned citizens came to the beaches, holding hands in a human wall to show their outrage over the US government's continued wasteful spending on a dirty form of energy production that is ruining some of America's great treasures. In California, Louisiana, Florida, the Carolinas, Texas, and Virginia, crowds gathered on beaches up and down the coast holding hands. Rather than relying on a short term "solution" - one attendant pointed out that all the oil off the coast of California might fuel our country for only thirteen years - that only exposes our fragile coastal ecosystems and valuable fisheries to further risk, attendees argued that we can shift to wind and solar energy, forms of energy production that will never swamp American coastlines, or poison fish and shrimp if an accident occurred. 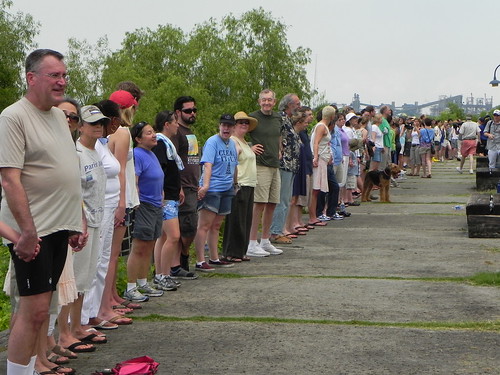