The Contract for the American Dream at the Conference 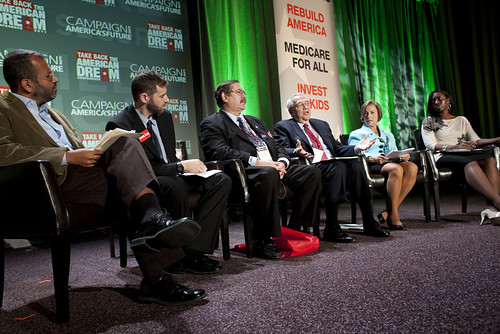 Friends and leaders in the American Dream Movement gathered on stage the Take Back the American Dream conference on Tuesday to discuss the Contract for the American Dream, actions to support it, and to paint a picture of just what it is that we're trying to reclaim. Our friend Dheepak Bhargava from Center for Community Change kicked off the panel to talk about what people are already doing on the ground with his organization to fight for an empowered and growing middle class, highlighting leaders in Ohio who organized to beat back Ohio's Senate Bill 5 which would gut labor protections for public workers that took a century to build up. (Dheepak was quite modest about his own role, but MoveOn.org's Justin Ruben described him as the movement's Meryl Streep - good looking, he's everywhere, and if he's in something, you know it's going to be good.) Dheepak passed to the torch over to Justin Ruben, MoveOn.org's executive director, who took a moment to explain just what the Contract for the American Dream is. When looking at this rising movement of people protesting across the country, MoveOn and allies began asking themselves, what are the core ideas we're pushing for? Instead of defining what they thought the vision for an economy that works for all Americans should be, they asked progressives around the country to weigh in on an open platform. Over 130,000 people weighed in with nearly 30,000 ideas and 6 million ratings on the submissions. The "truism" for progressives has been that we lack new ideas, but we've definitely disproven that notion with the Contract, with a robust number of solid ideas and thoughtful feedback that produced a vision of how we can create good jobs and have the money to pay for them. But Ruben pointed out that having the tool is great, but now we need to use this tool. We need to take it back to our communities and run with it. Millions of people in America know there's something wrong in America and are waiting for our vision. He called out an audience member, Bill from Kansas, who has already begun the work of building progressive communities all across eastern Kansas galvanized by the vision laid out in the Contract. We also need to show art and music inspired by and tied into the notion that the middle class is worth fighting for, worth protecting and growing. This is only the beginning. Leo Gerard, president of United Steel Workers, followed Ruben and really hammered home the point that if we want to create jobs and stabilize the middle class in this country, we've got to start making things again. But before he got to that, he really expressed excitement for the courage and discipline of Occupy Wall Street, and he told the audience. "Wherever it happens, in whatever city, Occupy Wall Street needs us." Gerard made some really smart points about infrastructure, outlining how we can create good jobs and clean up some public health and safety hazards by renovating schools, where millions of children currently sit 9 months out of the year in poorly ventilated, crumbling school buildings. Leo Hindery, the noted progressive businessman, mirrored Gerard's policy talk to outline better policy on progressive taxation, namely a financial transaction tax. Hindery mainly urged us to be bolder, to take a big step instead of a baby step as our first foot forward. He thought we should be bolder than the Buffett rule with a significantly higher tax rate on the wealthiest Americans, and without a doubt supported a financial transaction tax. The last two panelists made comments that made for an interesting mirror. Rep. Jan Schakowsky recounted that she grew up in a different America, with a growing middle class that could depend on a good job, with adequate pay, vacation time, healthcare, and retirement. She shared that she was able to get an undergraduate degree without going one cent into debt! Schakowsky detailed how that middle class dream, where you could work hard and pass on a better future to your children, were attacked and slowly chipped away over the last generation, with assaults on organized labor, fair taxation, and the social safety net. Erica Williams of the Citizen Engagement Lab started out by explaining that she was a from a different generation, a generation who hasn't experienced the same security and sense of place in this country, which has led to a crisis of democracy. When people over a generation feel marginalized, they lose their sense of power, their sense that they have a stake in society, which drives a vicious cycle that leads to further marginalization. We have to reverse this by putting the power back in their hands, by showing them that they "have power because of who they are", that they don't need to be a lobbyist or well-connected to change our country for the better.