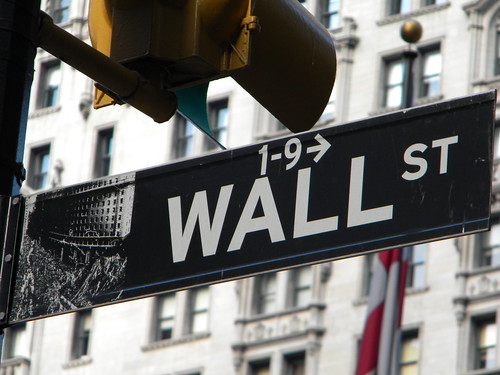 The giant cries of protest sweeping across the country are starting to reverberate in the halls of Congress. Senator Tom Harkin (D-IA) and Representative Peter DeFazio (D-OR) are proposing a Wall Street Tax. Their bill would establish a tiny financial transaction tax of 0.03% on every single trade of stocks, bonds, options, futures, swaps, and credit default swaps.

I think this is a great idea, and Congress should pass the bill. Rebuild the Dream and MoveOn.org started a petition so you can show support for the Wall Street Tax.

The Wall Street Tax would be a tiny cost for those of us socking away our savings for retirement or our children's education -- the average person paying into a 401(k) would pay only one dollar per year.

But Wall Street traders could no longer bet thousands of times a second for free. Much of the risk in today's market comes from rapid-fire "flash trading," where financial firms use computer algorithms to make thousands of trades per second. This doesn't add any real value to the market or to our economy.

When we buy something of real value, like a winter coat for our kids, we pay a sales tax, and rightly so. Yet these Wall Street speculators pay zero taxes while making a fortune passing electrons back and forth millions of times a day, all the while destabilizing our economy.

The Harkin-DeFazio Wall Street Tax is common sense. The concept has been around for a while. Hundreds of economists and responsible investors have long called for it, including Nobel Laureates Paul Krugman and Joseph Stiglitz, plus stock market billionaire Warren Buffett and former Goldman Sachs Chairman John Whitehead.

This idea is already law in several countries, including financial centers like the UK and Hong Kong. And the European Union is currently considering a much steeper version of what's on the table in the U.S.

The Wall Street Tax would raise somewhere between $700 billion and $1.2 trillion over ten years, critical funds we need to create jobs and protect vital programs.

Congress is about to face a telling choice. Will they vote to tax Wall Street gamblers in the 1%, or cut the Social Security checks of senior citizens in the 99%?

Sign the petition to make sure they know there's only one right decision.