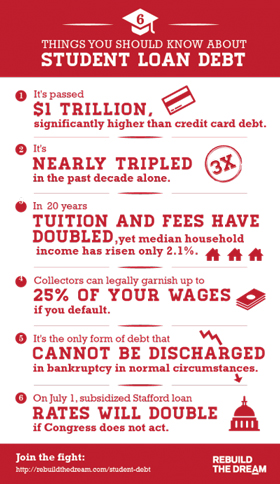 Education is a cornerstone of the American Dream. It is key to the promise that any hard-working person can do well in this country. But as the cost of higher education continues to skyrocket, we are breaking that promise. Young people today are told that a college education is the smartest and best way to get ahead in this country—that's how it worked for our parents. But today, government cuts to education have sent the cost of college skyrocketing, and federal loans fall far short. Millions of young people can't afford a degree without taking on the Insupportable private loans. But when they graduate, facing steep monthly loan payments, only 55% of them can find a job.

With our national student debt already past $1 trillion and climbing, millions are struggling with monthly payments, steep interest rates, and unfair fees—shackled to the student loan industry, which makes money off of taxpayers when students default. It’s been called the "next debt bomb" for the U.S. economy, similar to the housing bubble. And it's holding people of all ages back from the American Dream—just ask the 115,000 retirees who had their Social Security checks docked this year to pay for their student loans (in 2000, only six people had their checks docked).

We won a major victory on student loans in June 2012 —and saved students taking out loans an average of $1,000 a year (read more about our Don't Double victory below!) But we are not nearly done.

With the "student debt bomb" looming, we're raising awareness and lifting up smart solutions for the issue. We’re also exposing the predatory lending practices of the student loan industry, such as unfair fees and penalties for the unemployed, and building public pressure to force the industry to give students a fair shake.

And in the long term, we are calling for an end to the decades-long era of massive increases in the cost of higher education—the root cause of our debt problem. 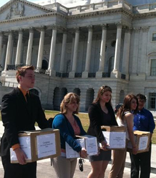 Interest rates on federal Stafford loans were set to double on July 1, 2012. This was a big threat to an already-strapped generation of young people, but nobody was paying any attention until Rebuilders and our allies got to work.

We kicked off the campaign with 130,000 letters young people delivered to Capitol Hill, demanding a fair shake for students. Politicians had been paying lip-service to the student loan issue for months. But our petition proved voters were serious—and convinced Washington to pay attention. We kept the pedal to the metal for four months. After 330,000 letters and petition signatures, 16,000 phone calls to Congress, 3,200 Letters to the Editor, a full-page ad in Politico, and millions of media impressions for our local and national spokespeople, we won strong support from President Obama, his rival Mitt Romney, and both Houses of Congress.

And on June 29, 2012, just days before the deadline, Congress responded to pressure and halted the student loan rate hike. 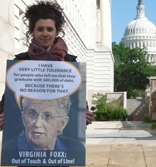 We're translating online actions into offline momentum. Rebuilders nationwide are supporting our online actions and petitions, and we're bringing that energy directly to the doors of power. For example, when Rep. Virginia Foxx (R-VA), chair of the subcommittee for higher education, said she had "very little tolerance" for people with student loans, we jumped into action. We raised a loud cry about her outrageous insensitivity—and more than 112,000 people joined in. With partners and allies, we delivered the signatures directly to Rep. John Boehner's office, demanding Foxx be censured. 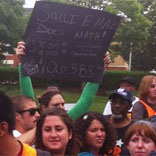 We'reputting pressure on the industry. In May 2012, in coordination with Student Labor Action Project (SLAP) and the United States Student Association (USSA), we planned and executed a major action at Sallie Mae headquarters, timed to make an impact at the corporation's annual shareholder meeting. Molly Katchpole and our partners led more than 100 young activists to protest at the lender's headquarters in Delaware. When they arrived, they were met with a line of police in riot gear, but five of our activists successfully negotiated entry into the meeting, where they told their personal stories of debt during the question and answer session, and presented more than 43,000 petition signatures to the Sallie Mae board.