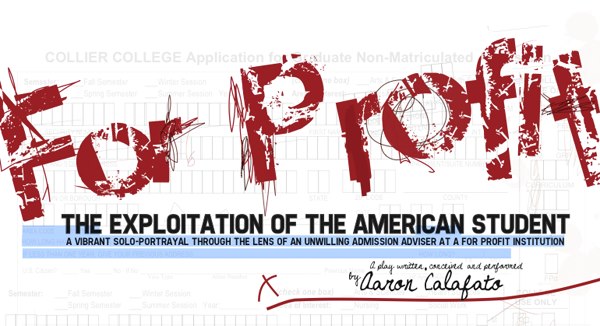 My name is Aaron Calafato. I’m an actor, writer, and activist who creates solo-theater for social change. My solo-play, FOR PROFIT, is about the 1.4 trillion dollar Student Debt Crisis, for-profit schools and the exploitation of the American student.

But before this, I was an unemployed 20-something with a bachelor's degree in communication desperately looking for a job to pay off my unreasonable student debt. When I finally was offered a job to start doing that, there was one problem: it was as an admissions advisor at a for-profit university.

Is the crushing burden of student debt a new collective part of the American Dream? I don’t think it should be. Do you?

As my friends at Rebuild the Dream say: “Every great movement in American history began by changing our culture”.

So with the help of Rebuild the Dream, we’re sharing this video with you to illustrate the importance and power of how storytelling can help change culture. Simply recognizing and sharing your own story in a unique way can add to the fabric of a larger movement -- a movement that could shift the paradigm of how we value higher education in America.

Aaron Calafato is a Performing Artist, Writer, and Teaching Artist that specializes in Solo-Theater for Social Change. He is a recipient of a 2012 Emerging Artist Grant from The Puffin Foundation and is currently touring his solo-play, FOR PROFIT as seen in: The Huffington Post, The Chronicle, Campus Progress, RT-America, NPR (NPR), MPBN, NPR (WYSO), WEWS ABC Channel 5, Mobilize.org, Portland Press Herald, The Fiscal Times, The Hill and Washington Monthly. Visit his website at aaroncalafato.com.