Be sure to read the following email regarding the Super Committee's ability to cut social security for 40 million Americans next week. Sign the petition and pass on to your friends and family. 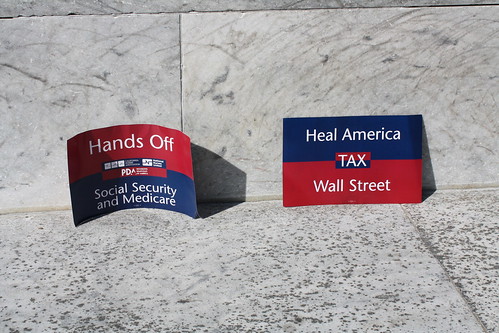 Dear Rebuild member, For four months the congressional "Super Committee" has been meeting behind closed doors to hash out ways to reduce the deficit. A report in The New York Times yesterday suggests that the committee is close to recommending mandatory cuts to Social Security instead of tax increases for the richest one percent.1 No way we can let this happen. This is a rotten deal that we have to stop. The committee issues their report to Congress in one week. We are collecting petition signatures that we will deliver this Friday. Our goal is to send a message that cuts to Social Security come with hell to pay from voters. Click here to tell Congress to reject any new cuts to Social Security. After you sign please take a minute to forward this email to friends, family, and co-workers so they know about the mandatory cuts that could be coming. Ask them to sign too. We have seven days to put the brakes on the Super Committee's report and kill this proposal. Here is how a news story described the cuts recently:

"Just as 55 million Social Security recipients are about to get their first benefit increase in three years, Congress is looking at reducing future raises by adopting a new measure of inflation that also would increase taxes for most families. Those with low incomes would be hit hardest.

"If adopted across the government, the inflation measure would have widespread ramifications. Increases in veterans' benefits and pensions for federal workers and military personnel would be smaller. And over time, fewer people would qualify for Medicaid, Head Start, food stamps, school lunch programs and home heating assistance than under the current measure."2

Conservatives have never liked Social Security. Those monthly checks prove that government can be a force for good in the lives of Americans. And let's be clear what the anti-tax stuff is all about—the rich and big companies don't want to pay their fair share. They've deployed their lobbyists to push for cuts to Social Security so they don't have to pay more in taxes. We urgently need to send Congress a message that cuts to Social Security are OFF the table. Please sign and recruit other people to sign. http://www.civic.moveon.org/rebuildpetition/scsocialsecurity/ Thanks for all you do.