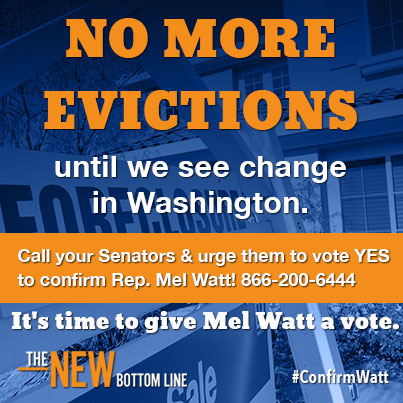 After months of inaction, the Senate is close to a vote to Confirm Rep. Mel Watt to become the permanent regulator for Fannie Mae and Freddie Mac, who together control more than half the mortgages in the US.  The agency is currently headed by a Bush-era appointee, Ed DeMarco and hasn’t had a permanent director since 2007. This is our chance to bring some fairness and stability back to the US housing market.

The vote is likely happening Thursday, so we need to prevent a potential Republican-led filibuster and make sure that our Senators vote to confirm Rep. Watt.

Can you take 1 minute to call your Senators at 1-866-200-6444 (toll free) to urge them to confirm Rep. Mel Watt to head Fannie Mae and Freddie Mac so we can keep millions of homeowners out of foreclosure and get our housing market and economy back on track? Click here to view a sample phone script.

Fannie Mae and Freddie Mac have been without a permanent regulator since President Obama took office. Homeowners, renters, and neighborhoods deserve better!

In April, Rep. Watt was nominated by President Obama to replace acting director Ed DeMarco --  a Bush-era appointee --  as permanent director of the Federal Housing Finance Agency (FHFA). As you may recall, Rebuild the Dream has been working hard to get DeMarco fired -- now is our chance to replace him with someone who will work towards our shared values!

As a 20-year member of Congress, Rep. Watt has supported principal reduction, championed anti-predatory lending legislation, and was a key supporter of the Dodd-Frank Act.  Rep. Watt knows what it takes to get the housing market and economy back on track.

Senators from both sides of the aisle, including Republican Richard Burr and Democrat Elizabeth Warren, have endorsed Rep Watt and recognize that he is extremely well-qualified to be our nation’s next chief housing regulator.  But some Republican senators oppose his nomination on party lines.