Richard Trumka: When is Enough, Enough?

The Take Back the American Dream crowd was on its feet today as AFL-CIO president, Richard Trumka, spoke about corporations who’ve fed upon America’s economic collapse: “…They’ll cry class warfare.  Well, I gotta tell you – it wasn't our class that declared war on working people! If they want to have a debate on class warfare, bring it on!” 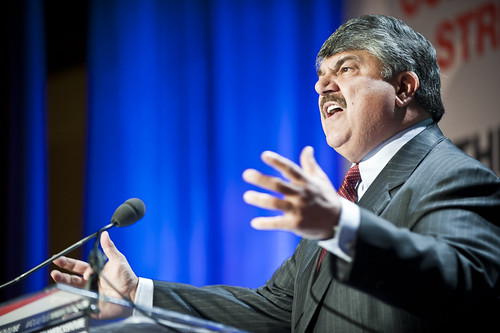 Trumka, whose coal-mining roots led him to become one of the country’s foremost labor leaders, spoke about corporate greed sucking Americans dry. “[There are] millions out of work, millions who have been thrown out of their homes, and now Wall St. wants more tax cuts for corporations with less regulations… My question is: Just when is enough, enough?” Trumka called out one bank specifically. He reminded the crowd that Bank of America - which rakes in about a billion a month – announced that it will begin charging customers $5 a month in fees for using their own debit cards next year. “Now mind you, this is the financial giant that paid its global banking and markets president nearly 30 million dollars... And this year turned around and announced that it’s going to fire 30,000 workers.” Trumka continued on to say that while over 25 million Americans are desperately looking for work, and 1 out of 3 Black and Latino children is living in poverty; CEOs of mega-corporations just got a 23% raise. He spoke of the doors of education being closed to students, and of banks filing millions of false affidavits used to seize the homes of the working class. “America is upside down.” Trumka urged the audience to support President Obama’s jobs bill, the American Jobs Act. “I've been one of the first to call out President Obama; but when he is doing the right thing - the courageous thing… we must support him.” Trumka implored that all Americans see the events taking place right now – Wednesday’s Jobs Not Cuts rally, the Occupy Wall St. movement – as no one group’s movement but a united movement of the people. “It’s our time!”   This blog is part of our live coverage of the Take Back the America Dream Conference