Rebuilding the Dream, Changing the Game: A Conversation with Van Jones 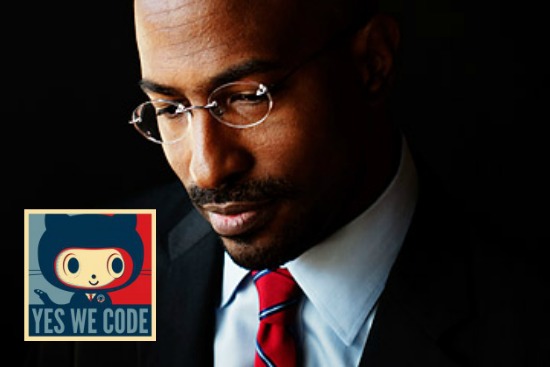 This interactive event was insightful, moving, and provocative and covered topics ranging from the true meaning of patriotism, to faith in the generation of Millennials, to his newest initiative #YesWeCode, inspired by the recent Trayvon Martin tragedy.

Although it is difficult to encapsulate the depth of an hour’s worth of meaningful conversation with Jones, I will highlight and summarize some of his most poignant points below. Embedded within each section is the video clip of that portion of the conversation.

Jones defines Cheap Patriotism as “what you see on Fox News, where they just wrap the American flag around a bunch of hatred and say that’s what patriotism is”. The far right has snatched the narrative of what patriotism means, and as a society, it is problematic when we let a small sector of the population determine what being a patriot means.

Deep Patriotism is progressive. In examining what it means to be patriotic, Jones asks:

He argues, rightfully, that it is not the conservatives and not the Tea Party. Liberty for all is a progressive idea, and includes gays, lesbians, and immigrants — “You can’t be an anti-immigrant bigot and a patriot”.