In February of 2011, pro-union demonstrations in Wisconsin rocked the nation.

Van Jones, Natalie Foster and Billy Wimsatt called for nationwide demonstrations to support the activists in Wisconsin as they could feel that the protests were giving voice to a bottom-up movement they knew reverberated beyond Wisconsin.

In response to their call, 50,000 people participated in “Save the American Dream” rallies nationwide, including every state capital. Encouraged by that success, they co-founded and launched Rebuild the Dream.

CONTRACT FOR THE AMERICAN DREAM 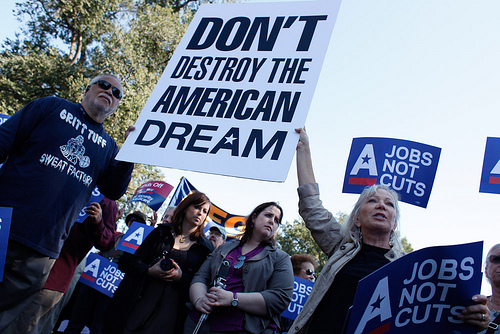 Immediately after launch we instigated the creation of a crowd-sourced economic agenda called the “Contract for the American Dream.” It was the product of more than 131,000 Americans who came together online and in their communities to write and rate 25,904 solutions for our economy and our democracy. Together, we identified the 10 most critical steps to get our economy back on track which created the backbone of the contract. More than 311,000 Americans have since endorsed the Contract.

Learn more about the Contract for the American Dream >> 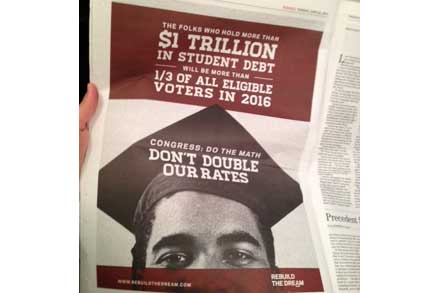 Seizing the opportunity to capture the national energy for economic justice, Rebuild The Dream set out in 2012 to help Americans move from anger to answers.

Seeing the heavy burden student loans placed on recent graduates, we set out to make a national issue of the fact that federal student loan interest rates were set to double come July 2012. Rebuilders delivered over 330,000 petitions and letters, made 16,000 phone calls, wrote 3,200 opinion pieces for their local newspapers and created a map with over 1,100 stories of student debt.

Driven by the energy harnessed by Rebuild and our partner organizations, President Obama and Republican Presidential Nominee Mitt Romney came out strong on this issue. In the end, Congress acted and passed a bill preventing the doubling of student interest rates saving 7.4 million students and families over $1,000 over the life of their loans. 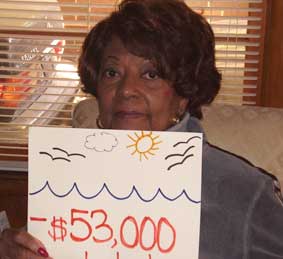 We put obstructionist Bush appointee Ed DeMarco, head of the Federal Housing Finance Agency, on the chopping block by asking President Obama to fire him for standing in the way of homeowner relief—and we quickly collected more than 120,000 signatures. We focused the media’s attention on DeMarco and earned coverage from The New York Times, The Los Angeles Times, Politico, The Huffington Post, The San Francisco Chronicle, Morning Joe, The Ed Show and This Week With George Stephanopoulos. As of early 2013, reports from Washington say the Obama administration is heeding activist pressure and plans to remove DeMarco later in 2013.

We sought victories beyond these national fights as well. When we heard that Higher Ground Empowerment Center, a community church in Atlanta was facing foreclosure by BB&T Bank, our members responded! Rebuild teamed up with Occupy Atlanta and Rainbow PUSH Coalition to put pressure on the bank to re-negotiate their loan and more than 65,000 signed our petition. BB&T backed down, granting full property rights back to the church.

Learn more about our Hope for Homeowners campaign >> 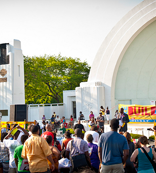 We now seek to capture a national audience with more creative, courageous work.

We sought to change the organizing landscape by bringing artists and political leaders together to create an inspiring and powerful atmosphere at our Rebuild the Dream Revivals. Our Hawaii Revival of poetry, music and politics transformed into support for a bill creating Hawaii’s first State Bank. With the partnership of MoveOn, we created a flash-mob aerial art project in Los Angeles alongside a gallery featuring over 100 artists. And in Wisconsin we fused political action with hip-hop in a crucial effort to energize Milwaukee around upcoming elections.

In September 2012, we partnered with the legendary artist Prince for a series of performances in Chicago. Prior to the concerts, Van joined Prince and Rosario Dawson on The View to promote the message of economic recovery and community building. At the concert we built the Rebuild the Dream Village where local community organizations, social entrepreneurs, tech startups, and other visionaries invited concert-goers to share their stories, participate in public art projects, join trainings, and envision a better world. Over 60,000 people were exposed to the 26 community organizations in the Village — and every side reported overwhelmingly positive interactions, with some organizations doubling their membership in those three days.

In December, continuing with the America’s Being Robbed mantra, we partnered with 5D Stories and CultureStrike to create ARTSTRIKE, an arts and culture day of action to raise awareness about the “fiscal bluff.” The response was bigger than we ever imagined. Not only did 70 talented artists create powerful work exposing the misleading ideas dominating the budget debate, but we were able to reach 11 million people with their work! Van’s article about ARTSTRIKE was featured on CNN.com and celebrities like Mark Ruffalo, Edward Norton, Russell Simmons, Moby, and more tweeted ARTSTRIKE links to their millions of fans, as did progressive leaders like Bill McKibben.

During the fall of 2012, Van Jones became an official contributor for CNN. In his first assignments, Van spent two weeks doing nightly coverage at the Democratic and Republican National Conventions, doing his part to make sure progressive values were front and center. Next up, he helped cover the presidential debates. On election night, Van was able to speak to more than 250 million people globally, through CNN and CNN international.