Occupy Our Homes is calling for a national week of action targeting big banks! The week will be from March 13th to March 16th, protesting banks' role in foreclosure abuse against families across the country. Read Occupy Homes' release below for a summary and quick calendar of events going down during the week: 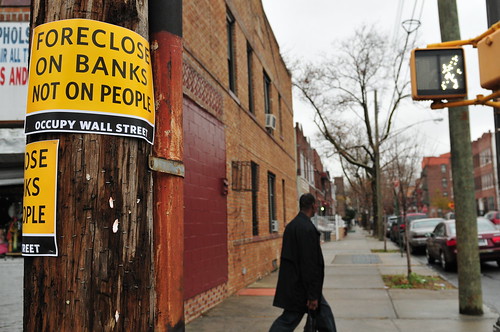 In solidarity with families across the U.S. resisting foreclosures and evictions, the Occupy Our Homes movement is announcing that March 13th-16th will be a National Week of Action to protest the criminal foreclosure practices of the nation's largest banks.

The housing system built by Wall Street banks and for the 1% has utterly failed the 99%. The banks' criminal foreclosure practices have cost millions of Americans their homes already. Millions more homeowners are at risk of foreclosure in the coming years. And while hundreds of thousands families face homelessness, bank-owned vacant homes fall into disrepair.

Everyone deserves a home and Occupy Our Homes will be standing with housing activists nationwide in their fight for dignity and a place to call home. It's time to take action.

Along with Occupy groups and community organizations across the country, the Occupy Our Homes network will stage protests nationwide—including protests at various bank headquarters and branches across the country—in a coordinated effort to draw attention to the banks' immoral behavior.

Each day of the week will feature a target bank, anchored by different Occupy groups and their allies.

"These executives have been making life hell for the average American. Meanwhile they're making record profits and have a comfy home to sleep in, said Marine veteran Bobby Hull, a Minneapolis home occupier. "It's time to fight back, and make clear to the big banks that we're not leaving."

"The biggest banks have been destroying our communities with foreclosures. We say no more," said Matt Browner Hamlin, an organizer with OccupyOurHomes.org. " The Occupy Our Homes movement is everywhere - members of the 99% are standing up in solidarity with home occupiers to demand the banks stop stealing our homes."

The original call that inspired this week of action came from Occupy Glen Iris and Occupy Atlanta to mark Chase Bank CEO Jamie Dimon's  birthday with a protest of the bank's criminal foreclosure practices. Occupy Atlanta has previously staged raucous protests at Chase bank branches and the group and its allies have helped stop a number of evictions and foreclosures, including that of an historic Atlanta church.