Just days after announcing steps to make higher education more affordable, President Obama is now moving ahead with relief for homeowners suffering through America's housing crisis. His new plan will help those in debt reduce their monthly payments, potentially saving families thousands of dollars a year by taking advantage of low interest rates. Any homeowner who has a credit score over 580 and has been consistently paying his or her mortgage bill for the last six months will be allowed to refinance. Incentives will also be paid to banks for forgiving parts of homeowner debt, and the Federal Housing Finance Agency (FHFA) will sell batches of foreclosed property to investors who will in turn rent the property out. 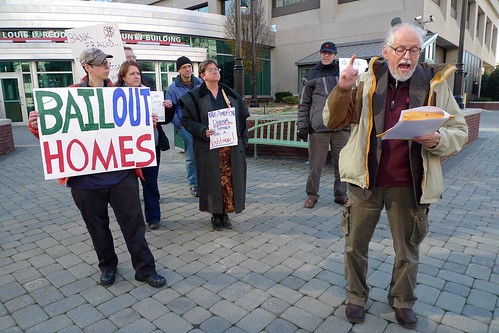 Read some of this Washington Post article for more details on Obama's proposal:

"...The centerpiece of the effort is legislation that would make it easier for homeowners who have been paying their mortgages on time to take advantage of today’s ultra-low interest rates, perhaps saving thousands of dollars a year. Millions of homeowners, including many who owe more than their properties are worth, have been unable to refinance.

White House officials estimated that the proposal, which requires congressional approval, would cost taxpayers between $5 billion and $10 billion. To offset that cost, Obama reprised his previous idea of imposing a new tax on the profits of financial firms. Republicans pledged to oppose the proposal.

To help the economy get more of a boost from low interest rates, Obama proposed that almost anyone who has a credit score above 580 and has been paying his or her monthly mortgage bill on time for the past six months be able to refinance. It wouldn’t matter under Obama’s proposal whether borrowers had government-backed mortgages or loans owned by banks and other private investors.

The only major limitation to the program would be on borrowers who own very expensive properties, relative to where they live. The maximums range from $271,050 to $729,750. A new program run by the Federal Housing Administration would be set up to refinance mortgages that are not backed by federal mortgage giants Fannie Mae or Freddie Mac.

The proposals are the latest in a long list of programs Obama has unveiled to address the problems facing homeowners. Almost all of the programs have fallen far short of their goals. Obama has acknowledged that his response to the housing crisis has not worked as well as he had hoped it would, and most economists say that the depressed housing market is one of the biggest drags on the economic recovery.

Still, Obama’s continuing push to provide aid to homeowners and boost housing prices draws a stark contrast with Republican presidential front-runner Mitt Romney, who has advocated a hands-off approach to the nation’s foreclosure epidemic. Obama, in his remarks, pointed to areas hit hard by the foreclosure crisis, including Las Vegas in the political battleground state of Nevada, where the next Republican presidential caucuses will take place.

...As part of his new plan, Obama also proposed encouraging borrowers who refinance their mortgages to take on shorter-term loans and direct the savings to rebuilding equity in their homes. As an incentive, the administration is willing to have the government pay the closing costs associated with refinancing — usually about $3,000.

The number of borrowers who might be eligible for the program is large: 3.5 million who do not have federally backed mortgages and 11 million who hold government-backed loans, according to administration officials. But previous estimates suggest that just a fraction of that population would take part in the program...."