NY Times: The Common Sense and Courage of Elizabeth Warren 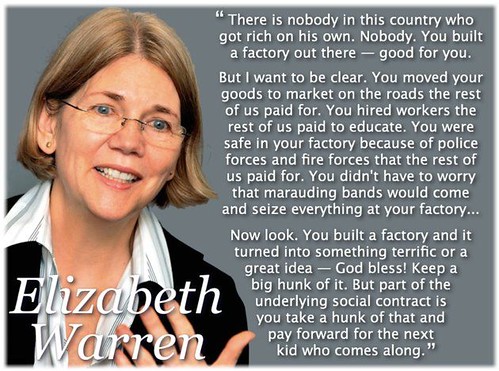 The New York Times had a great editorial today on the need for more politicians to have the common sense and political courage of Elizabeth Warren:

[Warren's] larger appeal, though, comes from her ability to shred Republican arguments that rebalancing the tax burden constitutes class warfare. In a living-room speech that went viral on YouTube last month, she pointed out that people in this country don’t get rich entirely by themselves — everyone benefits from roads, public safety agencies and an education system paid for by taxes. And those who have benefited the most, she says, need to give back more. “You built a factory and it turned into something terrific or a great idea — God bless!” she said. “Keep a big hunk of it. But part of the underlying social contract is you take a hunk of that and pay forward for the next kid who comes along.” Democrats should not be cowed by conservative taunts that the speech advocated “collectivism,” and use this argument to push back against the Republicans’ refusal to raise the taxes of people who make more than a million dollars a year — sometimes far more. Senate Democratic leaders say they plan to employ poll-tested phrases like “Tea Party economics” and “Tea Party gridlock” in their campaign for a jobs bill and beyond. They would be better off listening to Elizabeth Warren.