Mike Lux: The Worst Deal They Could Cut

Today Mike Lux, a progressive champion in DC, posted a must-read article on the Obama administration's role in the home foreclosure crisis. As details on the deal between federal government and big banks continue to emerge, it has become clear the Obama administration must do much more to relieve the majority of  American families who have lost their homes. The proposed $25 billion fund would cover only 5 percent of the underwater mortgage foreclosure problem, and further, will be paid for primarily by taxpayer dollars rather than banks themselves. Here are some clips from Lux's article: 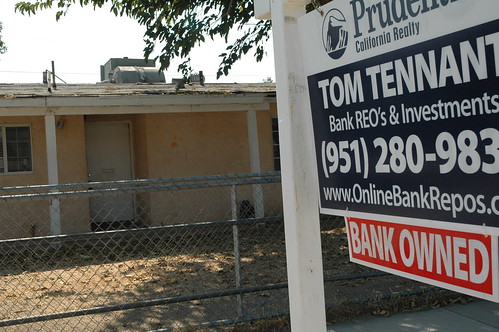 "Now look, I have never been a single-issue person, and I live in D.C. and work in politics, so I see dirty sweetheart deals for wealthy and powerful special interests all the time. But the housing crisis is the elephant in the room, the most central short-term economic issue that makes everything else pale in comparison. Long term, there are a number of very important economic issues that will determine our nation's future, reviving the manufacturing sector, creating green jobs, and getting wages rising again so the middle class starts to prosper principal among them. But in the short run, if housing stays dead and more than a quarter of homeowners stay underwater in their mortgages, this economy will not start producing significant numbers of new jobs, because the housing problems are so big they will drown everything else out. And giving away so much of the legal leverage we have over these bankers without negotiating to force them to write down those underwater mortgages will guarantee us a dead economy for many years to come. Welcome to Japan's Lost Decade, squared.

...This makes no sense. For example, for the Obama administration to be leaning so hard on California Attorney General Kamala Harris to sign off on this is truly politically suicidal, both for them and for her after she so strongly announced she was pulling out a couple of weeks ago. Yet they continue to push her. Why are they pushing so hard for this? It all boils down to Treasury Secretary Tim Geithner. It is apparent that Geithner believes the only thing that matters in terms of fixing the economy is to keep the big banks in good financial shape, which is ironic given that in public he claims that everything is fine with the banking sector now.

...But the big banks have violated so many laws, and have been so "creative" with their accounting, that there are all kinds of levers the administration has over them if they would only use them -- or let the people who do want to use them like New York AG Eric Schneiderman and Delaware AG Beau Biden. One of the leading policy experts on this in the country, someone who has been deeply involved in all these issues for years, told me that if the President wanted to get the banks to do something on mortgage writedown, it would take a group of smart lawyers and accountants about five hours to figure out how to bring the banks to heel.

...This is high-stakes drama, folks. Pay close attention to what happens next, because it may well determine the fate of both the American economy for the next 10 years and the 2012 election. Let's hope the Obama administration gets some sense on this issue, because by continuing on the path they are with this deal to once again bail out the banks from their own law breaking and incompetence, they are in danger of destroying all the good things they have done to shore themselves up politically these last couple of months. The political folks like Dave Plouffe need to understand the policy Tim Geithner is pushing is in direct contradiction with their political strategy of taking on Wall Street and will blow up badly in their faces. You can't give the Wall Street guys the ultimate sweetheart deal, and then try to run against Wall Street, or run as fighting for the middle class. As my old boss Bill Clinton used to say, that dog just won't hunt."

Read the rest of Lux's article here. **Note: In full disclosure, Rebuild The Dream Innovation Fund is a client of Mike Lux's political strategy consulting firm, Progressive Strategies.
Do you like this post?
Tweet