Making Some Noise To Protect The Future Of The 99%

Check out the following article from Bill McKibben and Van Jones on Huffington Post: 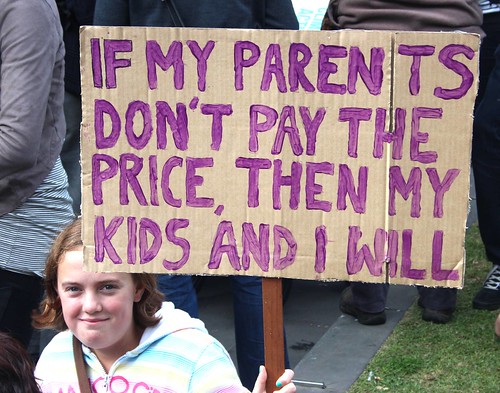 If you wanted one word to sum up this year, it's "noisy." From Tahrir Square to Zuccotti Park, people who have gotten tired of the old politics have started grabbing the microphone away from the authorities and speaking themselves. And not just speaking; chanting, drumming, singing-conjuring up a new future.

As 2011 draws to a close, diplomats from almost every country will be gathering in Durban, South Africa to talk about global warming. After the warmest year on record, and endless flood and drought, you'd think they'd be digging in for real change. But, alas, they seem likely to just go on spinning their wheels, unwilling to challenge the power of the fossil fuel industry. Leaders of the world's major economies are privately admitting that they're unlikely to reach a global deal until 2016 at the earliest. So here too people will need to raise their voices.

But since climate change is the first truly global problem, those people have to figure out how to raise a common message, one that crosses the boundaries of language. The best method -- proven in countless social movements -- may be music. Earlier this week, the global climate campaign 350.org launched "Radiowave." It's designed to take a single powerful song, and use it as the focus of a campaign that will sweep down Africa, one country at time, for the next few weeks, finally landing in South Africa just as the UN's climate conference begins.

The song is written and performed by a who's who of African musicians, from Angelique Kidjo to Maria Daulne and Ahmed Soultan. Hip Hop star Talib Kweli performs the opening verse. It's in English and French, but also Berber, Arabic, Xhosa, Zulu, Setswana, and Fon. But it's not just the beat that crosses borders; the sentiment, once translated, will make sense to anyone suffering the early effects of climate change. As the South African hip hop star Jabulani Tsambo puts it:

"The weather is crazy

Our leaders are lazy

Their attitude doesn't amaze me"

In almost every country, the refrain is the same: people desperate for jobs, but governments unwilling to unleash the green energy future in any substantial way. As the song's chorus puts it, our nations are

"Drilling for energy, like you cannot see the Sun

This earth belongs to everyone

Mining for energy, like you've never felt the wind

Time to change so we can live."

But it's not just the musicians who will be sending this Radiowave crashing across a continent. In every city and province, volunteers have been trained to use the tune as a way get discussion going. They'll be on radio stations night after night, informing people why climate change is important enough that some of the continent's biggest stars are singing about it. In this country, radio is too often the province of xenophobes -- but in most of the developing world it's the way everyone communicates about what matters.

Environmentalists in particular have too often appealed mainly to the left side of the brain, the part that likes bar graphs and pie charts. But we're learning -- more and more, music and art are part of the fight -- because, of course, they're part of the human experience we want to preserve.

No one can predict what 2012 will bring. But around the world lots of us are committed to keeping it as noisy as we possibly can. We'll sing more or less in tune -- but mostly we'll sing loud. We're tired of not being heard.