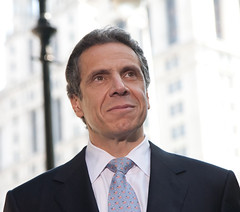 It turns out that having a lot of people in the streets over months and months can have an effect on the decision makers in state capitals and Washington, DC, after all. New York Gov. Andrew Cuomo is a moderate Democrat who pledged in 2010 to oppose all tax increases and to allow the "millionaire's tax" to expire. Earlier this year, Cuomo introduced an "austerity" budget, with massive cuts to state agencies and support for lower income New Yorkers. My how the times have changed. Via the Wall Street Journal, Gov. Cuomo is now floating new tax brackets for the wealthiest New Yorkers, and new measures for the relief of New Yorkers harder hit by the sluggish economy [subscription required at the link].

But people familiar with his thinking said one plan under review would create new, higher-income brackets. Wealthier New Yorkers would pay a higher rate than they did three years ago before the temporary tax hike, which expires this year. But they'd pay less than they did this year when the higher rates were still in effect. The higher rates would be packaged with tax breaks, possibly targeted at the middle class. One way of giving a tax break would be to broaden the brackets so that fewer filers are paying the top rate.

It just goes to show you how different the political conversation is now compared to just earlier this year.