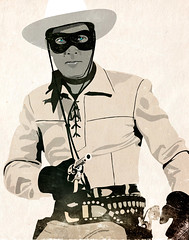 [/caption] I took a hike this morning with one of my dogs. Halfway into the hike, I heard what sounded like a large animal on the hillside above me. My dog was barking and I wondered, could this be a mountain lion or a bear? I walked another 100', looked up and saw a person high on the hillside thrashing around. I yelled, "Are you all right?" A woman's voice answered, "No." I tied my dog to a tree and climbed up the hill, where I found a 50-ish woman enmeshed in a large manzanita bush, scratches all over her. I pulled her out of the bush and led her down the hill, as she told me she had wandered off the high trail and got lost. As we got down to the trail, she said, "Oh thank you so much." I said, joking, "Don't thank me, thank Rebuild the Dream." Of course, she didn't know what the hell I was talking about, so I gave her a short explanation, then sent her down the trail as I untied my patient dog. I got to thinking, "Am I on to something here?" So here's my new idea: We organize a cadre of do-gooders, dress them in Lone Ranger outfits and send them out into the world to do good deeds. When they do good deeds, and people say, "Thank you, Masked Man," they respond, "No, thank Rebuild the Dream." And the legend spreads from there. Hey, the Lone Ranger is part of the American Dream, right? I sure hope so. And by the way, let's upgrade the Lone Ranger motif to get beyond the stereotypical and even offensive role of Tonto. No second-class roles and no second-class citizens in our America. Ed. note - Guest poster Guy Saperstein is a prominent civil rights lawyer, successfully prosecuting the largest race, sex and age discrimination class actions in American history. He's also an avid hiker and kayaker, and has written The Getaway Guide to the John Muir Trail, a book about hiking the 236 mile John Muir Trail with his youngest son. You can read his full bio here. Just to be clear, this is a wacky idea to spark thought, not a serious plan. If you have your own ideas about how to spread the American Dream Movement and put the Contract for the American Dream into action (and I know that you do), please share them on our Contract action ideas page!