The Jobs Not Cuts week of action culminated in an amazing GLOBAL day of action on Saturday, October 15th, in solidarity with Occupy Wall Street. The 99% put on over 900 events in 82 countries, including many of our own members demanding JOBS NOT CUTS from their local officials.Here's a look at some amazing events from all over the country:OAKLAND, CA: Residents of Alameda County demonstrated outside Chevron's corporate headquarters in San Ramon to protest government subsidization of Big Oil. "We're looking at the power of big money and it's controlling our country like it hasn't since 1929," said protester Sheilah Fish. Another protester, Karen Beck, added, "We don't have their money, but we have voices and we have votes." Furthermore, a large protest and rally in Oakland started at Laney Community College and marched to Oakland City Hall's plaza (Frank Ogawa Plaza, rechristened Oscar Grant Plaza). This is not to mention the thousands who marched in San Francisco just across the Bay!ASHEVILLE, NC: In Asheville, members gathered outside Rep. Heath Shuler's office (D-NC-11) to demand that millionaires on Wall Street pay their fair share. The protesters stood in solidarity with Occupy Wall Street.

SANTA ROSA, CA: "We're fighting the global corporate takeover of our everyday lives," said Rachel Mutterperl, demonstrator in Santa Rosa. Their group also stood in solidarity with Occupy Wall Street. On Saturday they organized a rally in Sonoma County that brought together labor unions, Santa Rosa Junior College students, the Peace and Justice Center of Sonoma County and the Committee for Immigrant Rights.OBERLIN, OH: 130 people gathered in Oberlin, Ohio. Different local speakers represented the needs of their particular niches in the Oberlin area. An elderly woman from a low-income high rise talked about the needs of her community, a member of the City of Oberlin Human Relations Commission talked about foreclosures in Ohio, and a student who had been to NYC spoke about the Occupy Wall Street movement. 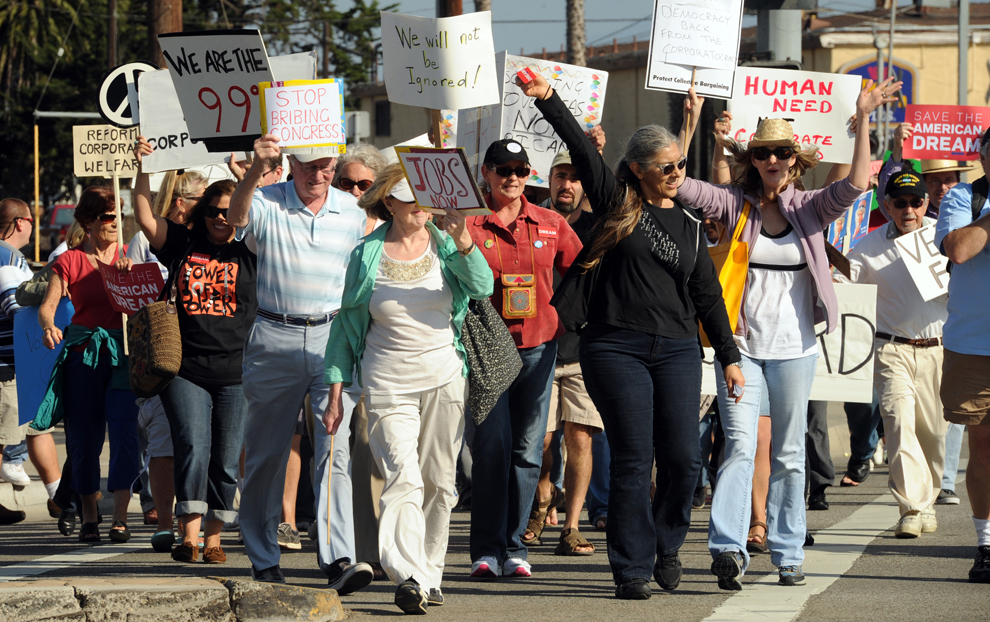 LEXINGTON, KY: Protesters gathered outside of Senator Mitch McConnell's office in Lexington, Kentucky to demand jobs not cuts from the Republican leader. The group was led by Rikka Wilson, who told the press "...that we're not going away and that we still want jobs, not cuts. We would like the top one percent to be taxed instead of the bottom ninety-nine percent, who we represent."CHICAGO, IL: Three Chicago-area MoveOn councils hosted a rally on Friday along with the SEIU. Approximately 300 people started at Federal Plaza, then marched to the local Bank of America and ended up at Occupy Chicago. Many continued onwards to close their accounts at Bank of America where they found that branches were closed in response to the protests.

SYCAMORE, IL: The Daily Chronicle reported on our groups rallying for an end to corporate greed in Sycamore, Illinois. About 70 people gathered in front of the DeKalb County Courthouse to participate. The group protested in solidarity with Occupy Wall Street.PHOENIX, AZ: In Phoenix, four councils came together for a Jobs Not Cuts solidarity action. There was a huge and diverse crowd of around 400 people, and speakers from the crowd told stories of their struggles in the economic recession. People signed the Contract for the American Dream which was presented in both Spanish and English.These were only a handful of the many actions that took place last week. Did you attend an event in your neighborhood? Email us your photos and stories!Keep up the good work everyone.