The crowd was hyped for Robert Reich yesterday as we kicked off the first American Dream summit here in DC.  And he didn't disappoint. Reich - the former Secretary of Labor under President Clinton, public policy professor at UC Berkeley, and acclaimed political economist and commentator - brilliantly weaved together the history of our broken economy with today's progressive movement.America is divided between two great forces, says Reich. The progressive force stands for tolerance and equal opportunity, and believes firmly in the interconnectedness of humanity. The regressive force believes in the opposite - intolerance, unequal opportunity, and that we all function on our own, independently. But as bleak as things may seem, "progressive forces always win out over the regressive forces." 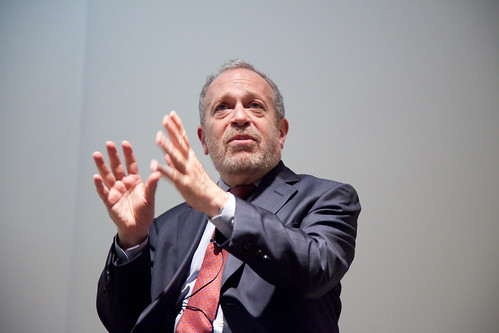 Reich offered a quick overview of where three decades of regressive politics have gotten us. To name a few:

-One of the worst Supreme Court decisions in American history: Citizens United ruled that corporations are people.

-Currently, 37% of families with young children are living in poverty, the highest percentage we've seen since records have been kept.

-Corporations are sitting on $2 trillion in cash, and the ratio of coroprate profits to wages hasn't been this high since before the Great Depression.

-The conservative right has left Americans feeling demoralized and cynical of our political system.

While the facts may be disheartening, for Reich they mean the time to instigate change is not only urgent but inevitable."Look at the civil rights struggle and the anti-Vietnam struggle, the darkest days of the 1950s with Mccarthyism. Every time this country has really been challenged, every time the regressive forces look like they're going to win, the progressive forces RALLY. That is the history of the United States."Catch this clip of Reich's speech from MoveOn.