Time to pay US back 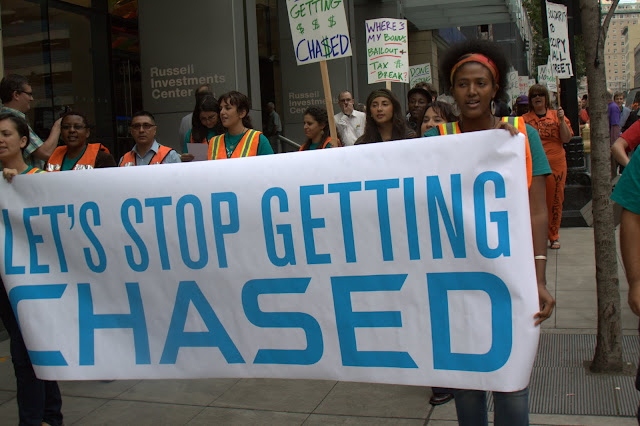 We've been waiting for something like this, and it's finally starting to happen. People are turning out in the streets to hold big banks accountable. Today in downtown Seattle, 175 people showed up outside Chase headquarters to hold them accountable for their behavior during the Great Recession and the taxpayer-funded bailout. 11 were arrested for their part in the large peaceful protest against J.P. Morgan Chase, Wells Fargo, and Bank of America, whose executives were all in town for a major business confab. After the building was completely locked down, the protestors overtook the intersection outside and held a mock trial for the CEOs of the three banks.

The action today was the first of a grassroots campaign by The New Bottom Line. Banks haven't had to answer for their actions that led to the Great Recession. If anything, they've taken taxpayer bailout money to gobble up smaller banks, pay bonuses, and lock down a seat at the table with members of Congress. They're sitting on a giant pool of money that could jumpstart businesses and put a floor back under the housing market.

And because the government continues to refuse to hold the banks accountable, it's going to take a wave of thousands of Americans to turn up the heat. This is just the beginning.

The Pay US Back campaign has three key demands:.

By the way, those 11 who were arrested at the protest? That's 11 more than the total number of bankers who have been prosecuted for their part in the massive financial meltdown of 2008, including illegal foreclosures, robosigning, and knowingly packaging bad mortgages into securities that they then sold to unwitting investors.