"The limits of our jobs debate"

Immediately following the introduction of the RESTORE the American Dream for the 99% Act and just one week after Obama's historic speech in Osawatomie, Kansas, Katrina Van Heuvel shares some enlightening thoughts on our country's jobs debate. She both applauds and critiques the Congressional Progressive Caucus's effort, pointing out the successes and shortcomings of the 99% Act - an interesting read and a reminder of the magnitude of the economic crisis we face.  Read the article below: 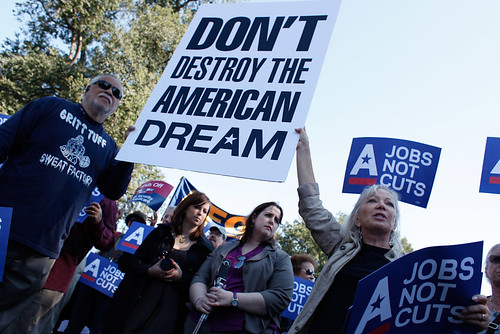 "The economic debate in Washington and in Europe resembles yesterday’s rejected pastry — half-baked, stale and inadequate in nutrition. Neither American party has stepped up to the crisis we face. Republicans seem intent on returning to the Bush years — repealing health-care legislation and financial reform, lowering taxes even more on the rich and corporations, and passing corporate trade accords. They pretend that if we just go back to the Bush policies, the economy will come back. But come back to what? The Bush recovery was the first in modern history in which most Americans lost ground.

Last week, President Obama traveled to Osawatomie, Kan., in an effort to break out of the stale debate. Invoking Republican President Theodore Roosevelt, he challenged the trickle-down, you-are-on-your own (yo-yo) politics that Republicans have trumpeted since the mid-1970s.

As an alternative, the president made the case for the United States to make itself the most attractive place to do business — providing investments to better educate citizens and to develop the most efficient infrastructure, cutting-edge research and innovation.

But when it came to specifics, the president was closer to sparring than kick-boxing.

He repeated the case for elements of his jobs agenda — including investing in infrastructure and research and development. He also implored businesses to hire veterans. Yet nearly three-fourths of the president’s plan simply sustains current levels of demand — extending the employee payroll tax cut, extending unemployment insurance, and helping to keep teachers in the classroom and police officers on the beat.

So what would bolder jobs creation look like? The Congressional Progressive Caucus, the largest caucus in the House, begins to answer the question with an omnibus piece of legislation that is slated to be introduced today.

The CPC’s “Restore the American Dream for the 99 Percent” legislation incorporates many of the smartest proposals for moving forward. It would provide programs to put 2.2 million Americans to work now — with a School Improvement Corps, a Parks Improvement Corps, a Civilian Conservation Corps and a Student Jobs Corps.

The CPC bill also lays out how to reduce the deficit while paying for important investments. It would reduce the defense budget by $1.2 trillion over 10 years as we end the wars in Iraq and Afghanistan. It would hike taxes on millionaires — the 1 percent who make more than a million dollars a year, bringing in $800 billion over 10 years. It proposes to raise $350 billion from Wall Street with a small tax on speculation. Another $40 billion would come from eliminating subsidies to Big Oil.

The bill is comprehensive — including measures to shore up Social Security and Medicare. It lays out priorities and direct action vital to get the economy moving, and it creates a foundation for sustainable growth.

This is what legislators call “message legislation.” It has no chance of even gaining a hearing in the Republican-controlled House. It is designed to show what could be done if Congress had the will to deal with the challenges we face.

Our decrepit infrastructure imposes increasing costs in lives and competitiveness, and the construction industry is flat on its back. With the United States able to borrow with interest rates near zero, we’ll never have a better opportunity to rebuild this country. Yet even the CPC legislation reflects how limited our debate is. The CPC bill calls for more investment than any other jobs bill, yet it is not commensurate with the crisis we face.

We’ve got 26 million people in need of full-time work. The economy isn’t generating sufficient jobs to keep up with the number of people trying to enter the workforce, much less making up for the 8 million jobs lost in the Great Recession. Unemployment among those aged 16 to 19 is about at the level it was in Egypt before Tahrir Square.

Yet instead of putting forth a bold and clear program to put people to work, with deficit spending to add a fiscal boost to the economy, as the conservative head of the Federal Reserve, Ben Bernanke, has urged, the CPC thinks it’s necessary to show how its program will be paid for, and it adds an array of spending cuts (to the military budget, for example) and tax increases to pay for its programs — which, by definition, will cost jobs, not create them. This reflects the suffocating elite focus on deficits. Credibility requires paying tribute to that fixation. But the result is counterproductive. Austerity is now driving Britain and continental Europe into recession. And in the United States, deficit fears put a brake on even the CPC’s vital jobs agenda.

Also missing from the CPC document is a clear sense of the new strategy that the economy desperately needs. We can’t simply go back to the Bush policies and get recovery, as Republicans suggest. We can’t boost the economy and return to growth, as the president sometimes suggests. Size is important, as the CPC suggests, but it is not enough."