A new study by Javelin Strategy and Research, a research and consulting firm, found that 610,000 Americans moved their money to local banks or credit unions because of the national grassroots day of action in November, Bank Transfer Day. This was par of a larger migration of a remarkable 5.6 million customers switching banks in just the last three months.Dozens of progressive organizations and leaders called for Bank Transfer Day last November 5, to call out the big banks for their greed and malpractice. Rebuild the Dream's own Move Your Money campaign resulted in people pledging to move over 80,000 accounts out of Bank of American and other big banks. 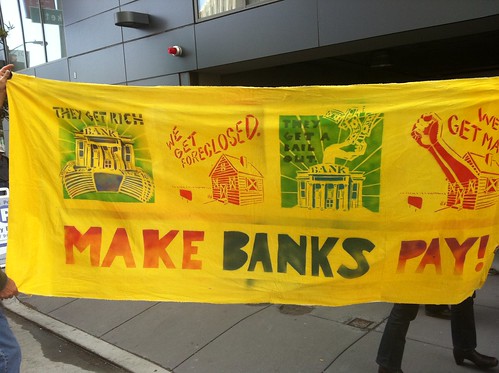 Finally, we've got some cold, hard stats on how badly banks are hurting from November's Bank Transfer Day movement.

Of those, the research firm says a cool 610,000 cited Bank Transfer Day as their reason.

If you remember, there was a lot of hoopla surrounding early figures released by the Credit Union National Association just after BTD, which inititially reported more than 650,000 customers made the switch to credit unions.

A month later they backpedaled, putting the figure at a little more than 214,000.

It was a bit of a setback for CUNA, especially at a time when credit unions were being heralded as the white knights of consumer banking.

Javelin's study will give them a bit more clout and at the very least shows that the growing chasm between consumers and financial institutions is nothing for big banks to sniff at.

"With a Google search of “bank transfer day” returning fully 22,000,000 responses we’re not surprised that these angry bank-switchers represent nearly a three-time increase over the amount of people who took their funds out of large banks for highly-similar reasons during the previous 90-day period in 2011," Javelin says.

While Bank Transfer Day was the catalyst for 11% of customer defections, more than a quarter of consumers cited bank fees as their reason for leaving.

No surprise there, especially as banks plummeted in the latest American Customer Satisfaction Index report. People have been grumbling about big bank practices ever since Bank of America and Chase tried to slap customers with a $5 debit card fee back in the fall.

“Banks are facing difficult times on multiple fronts: Profits are being squeezed, regulators are more demanding, foreclosures remain problematic, and consumers are fighting back on fees. On top of all this, many banks are losing customers, including defections prompted by grassroots efforts like the recent Bank Transfer Day," he said."