Ai-jen Poo gave her speech "Jobs, Justice, and the American Dream" this morning at the American Dream Summit. As we blogged earlier, Ai-jen is at the heart of the organizing movement for better pay and better working conditions for domestic workers - nannies, housekeepers, and caretakers of the very young, the elderly, and frail. She called on the country to care for those women who dedicate their lives to caring for others.[caption id="" align="aligncenter" width="500" caption="Photo courtesy of Jobs With Justice Flickr"] 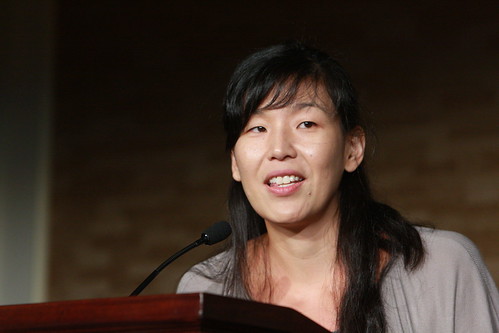 [/caption]Ai-jen opened with the story of domestic worker Maria, who came to this country in search of the American Dream. She took a job as a live-in domestic worker for a family of six with a disabled child, working 18 hours a day, 6 days per week, for less than $3 an hour. Maria slept in a flooding basement, with hardly any time to take care of her own disabled child.Not every work place is a sweatshop, acknowledged Ai-jen. But every one of the 2.5 million domestic care providers working daily in our communities is vulnerable to abuse.The exclusion of domestic workers from basic union protections is a practice rooted in early Southern racism - in the 1930s, members of Congress from the South refused to support Congress's labor laws unless domestic and farm workers (at this time predominantly black) were excluded.That's why domestic workers are creating a new movement for more humane jobs with dignity and justice. After 6 years of organizing in New York, Domestic Workers United passed the first state-wide Domestic Workers Bill of Rights. In 2007, they formed an alliance to take the movement national. They are now on the way to passing a California Bill of Rights, and have 35 affiliate organizations in 19 cities and 11 states across the country.Here were Ai-jen's three pieces of advice:

1) We have to fight to win, no matter what. We do not in fact know what is possible if we are able to organize and change the context for our dreams. And no one wants to root for a team that doesn't fight to win. We have to embody the possibility of big wins.

2) We have everything we need in order to win. In this room [at the conference] and in our communities around the country, we have the desire, the resources, the strategic creativity and capacity, and the courage we need to transform this country. And our job as the American Dream Movement organizations and leaders is to create the context to turn that into power. We've done it before and we can do it again.

"We're building a movement based on values," said Ai-jen. "Love, respect, human dignity. That's what we're building today for our families, and for our future. That's the American Dream. And we will succeed. Si se puede."Check out Ai-jen's latest campaign, Caring Across Generations.