A highlight of yesterday's conference was a breakout panel on the legendary movements in Wisconsin and Ohio, which have inspired thousands across the country to stand up and fight back.Featured speakers included John Nichols of The Nation magazine; president of the Wisconsin State Firefighters Union, Mahlon Mitchell; Mike Pyne of the United Steel Workers; Doug Burnett of AFSCME; Courtney Fully from United Food and Commercial Workers; Bruce Colburn from SEIU; Mary Bell from Wisconsin Education Association Council; and social media guru Scott Goodstein. 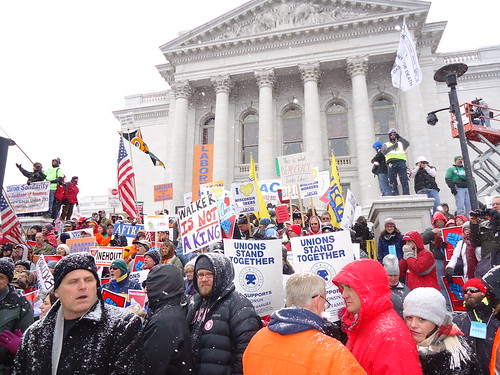 The panel opened with Mahlon Mitchell, who recounted the events preceding Governor Scott Walker's (R-WI)  so-called Budget Repair Bill. In January, the same month Mitchell became president of the state's firefighter union, Wisconsin's government gave tax breaks to corporations, but told people the state was broke. Then Walker tried to take away the rights of state and municipal employees and teachers.The firefighters decided they could not sit idle."We could be next," said Mitchell. "We were just responding to an emergency; there was an emergency in our state."Mike Pyne of United Steel Workers saw the struggle as shared among all his brothers and sisters in the public sector. While the demonstrations drew the nation's attention, growing to thousands of people, Pyne pointed out that for change to be possible they needed a political component. "We had to take political action to intervene," he said.And fortunately, asserting power through the political process is a well-established practice in the state. Doug Burnett broke down Wisconsin's history of fighting political corruption as home of the recall election. According to Burnett, the recall was created to take those people out of office who had turned their back on the people. Or, for those "who had perhaps not disclosed when they ran for election that their real agenda was to eliminate the right to unionize in Wisconsin." Having that law proved critical in the struggle.For Burnett, Wisconsin's movement was about stepping up to the challenge that was Walker's budget bill."We did not choose that recall fight, and we didn't choose the fight over collective bargaining. They chose it. But once they chose it and once we understood the magnitude of the movement that had been created in Wisconsin, we joined it in a big way," he said. "The lesson is: they picked a fight and we beat them back and beat them back hard."But the fight didn't end in Wisconsin. Courtney Foley of United Food & Commercial Workers represented the new front - Ohio - where the attack on collective bargaining and the response it has triggered are developing rapidly."It's really interesting when you look at the short timeline of what happened in Ohio" said Foley. "On February 7th, SB5 was introduced. By March 30th, Governor Kasich had signed it into law. And in 8 weeks, on June 16th, We Are Ohio had more signatures than we needed to file already. In 8 weeks!"Foley recalled that as they unloaded all the petitions, engineers had to come weigh the room because they thought they'd break the floor. They'd never seen so many petitions in an office before.Bruce Colburn of Wisconsin's SEIU shared his thoughts on the coming year. "One thing you can say, there WILL be a recall of Scott Walker in Wisconsin this year." And the fight won't stop there. People nation-wide will have to stand up and make sure their state governments feel the magnitude of the struggles that have set a precedent in Wisconsin and Ohio.In the words of Colburn, "We have to start fighting not just not to lose, but to start to win."