Report Back: National Move Your Money Day a Success

November 5th was national Bank Transfer Day, and tens of thousands of you pledged to Move Your Money. The day was a huge success with over 250 events in every corner of the country and over 10,000 people attending, and that's counting only the events tracked by MoveOn.org and Rebuild The Dream. 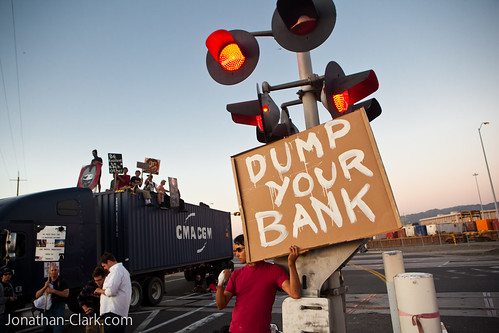 Just a week after posting Move Your Money, we had an overwhelming response from members fed up with banks and the 1%. Van Jones reported in the Huffington Post that a day before Bank Transfer Day we already had 70,000 signatures:

"We need to stop feeding what we are fighting. Let's fund banks that will fund our American dreams, not our American nightmares.

Within our own wallets, we have the power to hold Wall Street banks accountable. We can move our money to community banks and credit unions, institutions that are responsive and accountable. to the communities we live in. Community banks know that they depend on the well-being of local residents and the local economy. Credit unions know that they thrive only if their account holders thrive. In other words, they put people before profit. Wall Street banks have it backward, sacrificing people's life savings and homes just so they can prop up their stock price."

Move Your Money made local news all over the country - in Madison, Oakland, Detroit, Atlanta, Baltimore, Seattle, Albuquerque, St. Louis, and dozens of other cities. We also made national news on Huffington Post, CNN, The Nation, and others. Watch us on the Rachel Maddow show below:Now in our second week with 81,500 pledges and counting, we are standing up for the 99% by demanding big banks be held accountable for the economic crisis. While there were too many events to count, here just a couple of local reports back from Bank Transfer Day.Greensboro, NC: In Greensboro, folks moving their money made local news:

GREENSBORO — At 11 a.m. today, look for Ken Knight outside the offices of Bank of America and Wells Fargo on Green Valley Road.

Knight and those who join him will carry signs that say “Make Wall Street Pay,” “Bail Out the 99%” and “Do You Want to Change Banks?”

“I am very excited that people are finally waking up and finding out that they are being left out of the game,” said Knight, a retired social worker and organizer for the Guilford County MoveOn Council. “(We’re) reminding lots and lots of people that this is their country and that these banks are here to service the public and not just their shareholders.”

Today’s protest will be one of more than 280 such events put on around the country by MoveOn, a national movement.

Los Angeles, CA: Meanwhile, protesters in Los Angeles demanded, "Obama, tear down this Wall Street." Check out a video from their Move Your Money event on November 5th:Let's make every day Bank Transfer - continue to spread the pledge to your neighbors and communities. Demand that banks be held accountable.
americandream
Do you like this post?
Tweet