In the last several weeks we have witnessed Congress bitterly debate different portions of the jobs bill. But last night, on the eve of Veterans Day, a portion of the bill that would grant tax breaks to businesses who hire unemployed veterans passed unanimously in the Senate, 95-0. This is a good start, but we will need more than tax breaks and some modest job training funds to ensure our veterans get the homecoming they deserve. Two weeks ago the country breathed a sigh of relief when it was announced that our troops would be brought home from Iraq in time to celebrate the holidays with their friends and family. Van Jones called on Congress and the President to bring veterans home to 100% employment in honor of their brave service to the American people. May we take this day to reflect on the sacrifices our veterans have made and what this country can and should offer them in return. 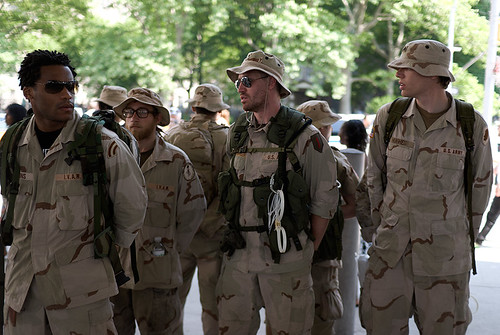 Read part of the veteran jobs bill in Washington Post below:

The bill, approved Thursday by a vote of 95 to 0, would extend tax credits to businesses that hire unemployed veterans. It would also provide new dollars for retraining older unemployed veterans for high-demand fields and includes programs designed to make it easier to get civilian certifications for military training.

The vote came after weeks of partisan sniping over the president’s jobs plan. The Senate held doomed votes on the package as a whole and then on pieces of the proposal that had drawn strong Republican opposition, while Obama barnstormed the country slamming the GOP for its obstinacy.

But lawmakers in both parties said the veterans vote showed that Washington is still able to rally around the troops and reach some bipartisan agreement.