This week, a group of patriotic millionaires lobbied Congress with an unusual request - "Raise our taxes!"

Think Progress reports that the group, Patriotic Millionaires for Fiscal Strength, planned visits to different Super Committee members on Wednesday to ask that they be made to pay their far share, and to demand that Congress repeal the Bush tax cuts for the wealthy. Read part of their article below: 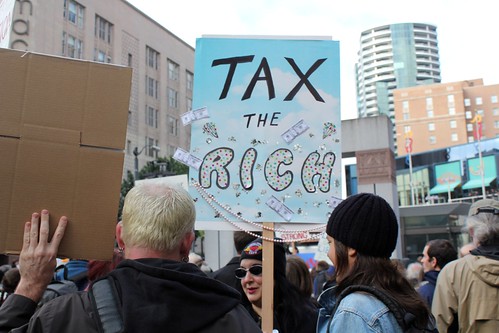 With Republicans attempting to hold firm to their anti-tax platform, a group of millionaires advocating for higher taxes on the super richvisited Congress yesterday to urge super committee members and congressional leadership to reject any deal that doesn’t include such revenue increases.

The group, Patriotic Millionaires for Fiscal Strength, planned visits to six super committee members, Tea Party representatives, Democratic leadership, and conservative anti-tax maven Grover Norquist, the head of Americans for Tax Reform. Among the millionaires’ top priorities is persuading Congress to repeal the Bush tax cuts for the wealthy, which blew a hole in the nation’s budget and left the country with unsustainable levels of debt, CNN Money reports:

“We want to pay more taxes,” said California millionaire Doug Edwards, a former marketing director for Google. “If you’re fortunate, and you make more than a million dollars a year, you ought to pay more taxes.” [...]

“If the super committee bill doesn’t raise our taxes, we will ask our fellow citizens to consider killing the bill,” said Eric Schoenberg of Franklin Lakes, N.J., an adjunct professor of marketing at Columbia Business School.

The demand of these patriotic millionaires has been recurring, and gained fame recently with Warren Buffett's call for fair tax rates on the wealthy. As pointed out by Elizabeth Warren, nobody in this country becomes wealthy without the help of the rest of us. Let's continue encouraging millionaires to pay it forward.