Mary Kay Henry, President of the Service Employees International Union, opened her plenary speech Tuesday with the story of an ordinary man who fought for extraordinary change. 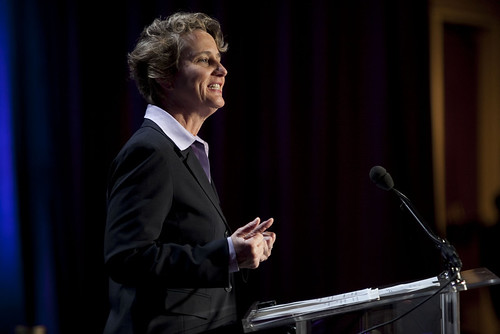 In 1902, William Queese was a janitor on the south side of Chicago. His day started at 5am and didn’t end until 10pm. Every single day of every single year he scrubbed, he painted and he cleaned.  Quesse had no job security and no days off; and, for all his work, Quesse earned $20 a month. That is, until one day when he decided that he and his fellow workers deserved more.  He gathered 200 other janitors on Chicago’s south side together and asked them one simple question, “Should we ban together and fight for a better life by forming a union?”Every single person said, “Yes.”Out of the frustrations of 200 fed-up apartment workers in 1902, BSEIU – precursor to SEIU - was born. Today SEIU represents 2.1 million working people across the US, Canada and Puerto Rico.For Mary Kay Henry, it is this common belief in a right to a better life that will inspire the American people to unite and fight for better jobs, immigrant rights and economic equity.She borrows a page from Rev. Jesse Jackson’s history and speaks about his grandmother – too poor to afford a blanket.

Henry asserts that we who share a common vision of America cannot be torn apart by the forces that want to divide our power.“We must stand against racism, sexism and homophobia and all the things that try and tear us apart."According to Henry, the American Dream Movement isn’t just about taxing Wall St. or creating good jobs – though she believes these things are essential to the survival of working class people. She affirms that we need jobs in America, but understands that jobs alone won’t change the course of history and give all of us a better future.“We don’t need just jobs.  We need good jobs with justice.”She states:

“One of the problems in America is that there are too many people in America making money on money on Wall Street. We have too many job-killing corporations like Verizon that are reporting 24 billion dollars in profits and not paying a single dime in taxes and laying off 20% of their American workforce. You want to talk about jobs? We can create good jobs in our country in manufacturing. When Amazon first created the Kindle, they looked for a year to produce the LCD screen in the US, but they couldn’t find a single company in our country to do it. That’s wrong. If American genius invented it, American labor should build it.”

She concluded by saying there is plenty of work that needs doing in every city and town in this country and millions of people that want to do it. “It’s time to put the two together and put America back to work.”