Justice for Janitors rallies draw crowds around the country 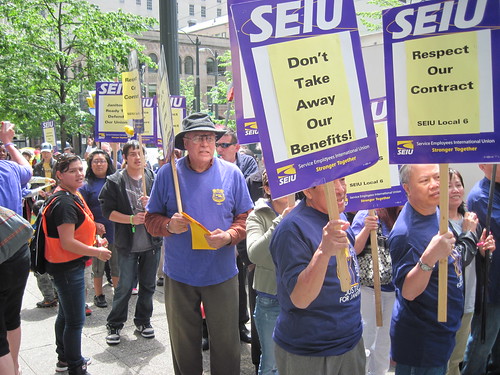 As we mentioned last week, janitors planned to lead rallies around the country to mark the anniversary of a 1990 Century City march stopped short by police brutality. The workers didn't just aim to commemorate those injured in the march, or even the organizing victory that followed soon after. They also hoped to raise awareness of sliding standards of living for people who work incredibly hard for a living with little recognition or compensation.In Los Angeles, 1,000 janitors and supporters gathered along the streets next to the Los Angeles County Art Museum, looping all the way around the block until ending with a rally in the museum park.In New York, hundreds gathered along Fifth Avenue in the shadow of the skyscrapers they help to keep clean. In Connencticut, workers rallied in front of the Government Center. In New Jersey, janitors walked off the job to protest low wages and poor working conditions. All told, janitors and their supporters rallied in 15 cities across the country.Many of the workers pointed out the desperate need for immigration reform due to the development of an underground economy that exploits undocumented workers and pushes down wages and working conditions for everyone. Sadly, janitors clean up at companies who are making record profits,  while the janitors themselves make in some instances as low as $312 a week after taxes working a full time job... after years of experience.Organizers stressed the need to stick together to fight back against corporate greed, anti-labor policies emanating from state capitals around the country, and a disturbing trend towards unregulated temp agencies that skirt minimum wage and fair labor laws.