The momentum is building.  Thousands around the country are occupying Wall Street to protest the one percent that have left 99% of us to struggle with a failing economy. Our presence is on the rise and we must keep this energy going!

Right now 25 million Americans are either unemployed or under-employed. The president has laid out two strong plans for creating jobs and making millionaires pay their fair share. But already millionaire members of Congress are speaking out against the proposed Buffet Rule tax increases. We cannot give Congress the chance to hack away at these proposals until there is nothing left for the American people. The time to come together is now.
Join us as we mobilize our family, friends and neighbors to demand “Jobs Not Cuts.” Between October 10th and 16th, the American Dream Movement – powered by thousands of concerned citizens - will call upon their elected officials to create desperately needed jobs.This Week of Action is to be one of many that will take place this year backing President Obama’s plan to put Americans to work through rebuilding local infrastructure – from dilapidated school buildings to unsafe bridges.  We need to hold him and elected officials accountable to that plan.
We need to ensure that the budget won’t be balanced on the backs of elderly citizens or single moms through cuts to social security, Medicare and Medicaid.  We need mega-rich corporations to pay their fair share in taxes back to the people that made them successful in the first place.  We can build a better America and it happens when we bring our hearts and minds together to act on a common vision.On October 10 – 16, let’s make sure Congress is listening:  Jobs Not Cuts.Click here to find or host an event in your area. 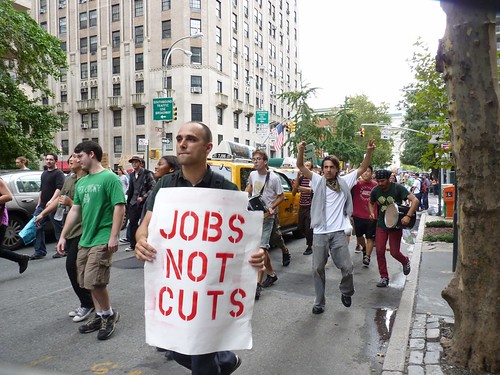