Job growth warming up, but long way to go

The Hill reports that even as the job market slowly improves, too many Americans still find themselves un- or underemployed, a condition  ultimately hindering the country's ability to make an economic recovery. Consumer spending cannot resume normal levels until Americans have the means to spend - that is, until they can find stable and meaningful employment. Read part of the  article below: 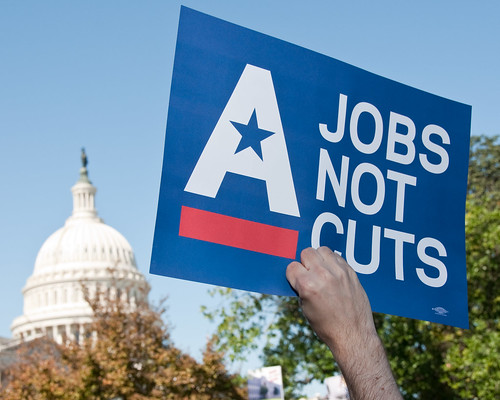 "All eyes are on consumers and whether they can spend enough to boost economic growth this year.

They are going to need jobs to do it.

The economy added 200,000 jobs in December, which was better than expected, and the jobless rate fell to 8.5 percent, the Labor Department reported Friday.

But even with consistent improvements in the labor market during recent months too many people are still out of work or underemployed to accelerate the pace of consumer spending — a crucial 70 percent of economic activity.

The number of workers who are unemployed, want a job but have stopped looking or are working part time and want more hours, dropped to 15.2 percent from 15.6 percent in November, the third straight month of declines and a nearly three-year low.

While there are 13.1 million unemployed, there also are 8.1 million working part-time who want full-time jobs, a drop from 9.3 million in September and the lowest level since January 2009.

Overall, 23.7 million are either out of work or underemployed — a figure way too high to trigger a revival of consumer spending, even though a large percentage of Americans have managed their accounts — credit cards, mortgages and savings — well, analysts say.

John Ulzheimer, president of consumer education at SmartCredit.com, said underemployment combined with the persistently high jobless rate will continue to stymie any significant pick up in spending in 2012.

"Removing 25 percent of buying power from the economy won't work," he said. "You can make everything, car loans and credit cards, 0 percent interest, but those people don't have any capacity to make any payment, even on a cheap loan."

As the job market improves — economists estimate that 2.1 million jobs will be created this year, a third of what is needed to recover the remaining 6 million jobs lost during the recession — workers will need to find new and better jobs to kick-start spending."