Paul Krugman wrote a great op-ed for the New York Times about the right-wing attack on higher education. Krugman argues that the deterioration of higher education has been a symptom of the 1% looking out for their own interests at the expense of America's majority. Read the op-ed here: 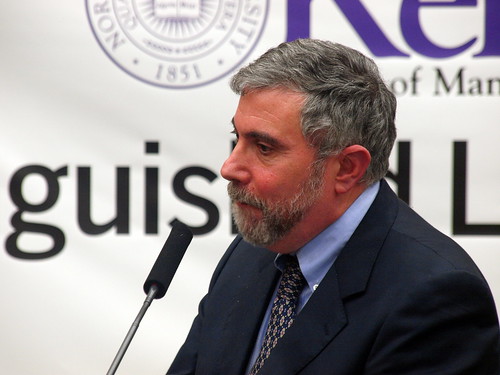 One way in which Americans have always been exceptional has been in our support for education. First we took the lead in universal primary education; then the “high school movement” made us the first nation to embrace widespread secondary education. And after World War II, public support, including the G.I. Bill and a huge expansion of public universities, helped large numbers of Americans to get college degrees.

But now one of our two major political parties has taken a hard right turn against education, or at least against education that working Americans can afford. Remarkably, this new hostility to education is shared by the social conservative and economic conservative wings of the Republican coalition, now embodied in the persons of Rick Santorum and Mitt Romney.

And this comes at a time when American education is already in deep trouble.

About that hostility: Mr. Santorum made headlines by declaring that President Obama wants to expand college enrollment because colleges are “indoctrination mills” that destroy religious faith. But Mr. Romney’s response to a high school senior worried about college costs is arguably even more significant, because what he said points the way to actual policy choices that will further undermine American education.

Here’s what the candidate told the student: “Don’t just go to one that has the highest price. Go to one that has a little lower price where you can get a good education. And, hopefully, you’ll find that. And don’t expect the government to forgive the debt that you take on.”

Wow. So much for America’s tradition of providing student aid. And Mr. Romney’s remarks were even more callous and destructive than you may be aware, given what’s been happening lately to American higher education.

For the past couple of generations, choosing a less expensive school has generally meant going to a public university rather than a private university. But these days, public higher education is very much under siege, facing even harsher budget cuts than the rest of the public sector. Adjusted for inflation, state support for higher education has fallen 12 percent over the past five years, even as the number of students has continued to rise; in California, support is down by 20 percent.

One result has been soaring fees. Inflation-adjusted tuition at public four-year colleges has risen by more than 70 percent over the past decade. So good luck on finding that college “that has a little lower price.”

Another result is that cash-strapped educational institutions have been cutting back in areas that are expensive to teach — which also happen to be precisely the areas the economy needs. For example, public colleges in a number of states, including Florida and Texas, have eliminated entire departments in engineering and computer science.

The damage these changes will inflict — both to our nation’s economic prospects and to the fading American dream of equal opportunity — should be obvious. So why are Republicans so eager to trash higher education?

It’s not hard to see what’s driving Mr. Santorum’s wing of the party. His specific claim that college attendance undermines faith is, it turns out, false. But he’s right to feel that our higher education system isn’t friendly ground for current conservative ideology. And it’s not just liberal-arts professors: among scientists, self-identified Democrats outnumber self-identified Republicans nine to one.

I guess Mr. Santorum would see this as evidence of a liberal conspiracy. Others might suggest that scientists find it hard to support a party in which denial of climate change has become a political litmus test, and denial of the theory of evolution is well on its way to similar status.

But what about people like Mr. Romney? Don’t they have a stake in America’s future economic success, which is endangered by the crusade against education? Maybe not as much as you think.

After all, over the past 30 years, there has been a stunning disconnect between huge income gains at the top and the struggles of ordinary workers. You can make the case that the self-interest of America’s elite is best served by making sure that this disconnect continues, which means keeping taxes on high incomes low at all costs, never mind the consequences in terms of poor infrastructure and an undertrained work force.

And if underfunding public education leaves many children of the less affluent shut out from upward mobility, well, did you really believe that stuff about creating equality of opportunity?

So whenever you hear Republicans say that they are the party of traditional values, bear in mind that they have actually made a radical break with America’s tradition of valuing education. And they have made this break because they believe that what you don’t know can’t hurt them.