How Republicans are being taught to talk about Occupy Wall Street

Interesting, insightful, and pretty hilarious look at how Republicans are being taught to talk about Occupy Wall Street, from Yahoo News. The GOP Governors Association met in Florida this week, where they were addressed by Republican strategist Frank Luntz.One highlight is Luntz's comment on the Occupy movement: "I'm so scared of this anti-Wall Street effort. I'm frightened to death. They're having an impact on what the American people think of capitalism."Keep up the good work, Occupy. Read the article below:[caption id="" align="alignnone" width="500" caption="Frank Luntz addressed the GOP Governors Association in Florida this week."] 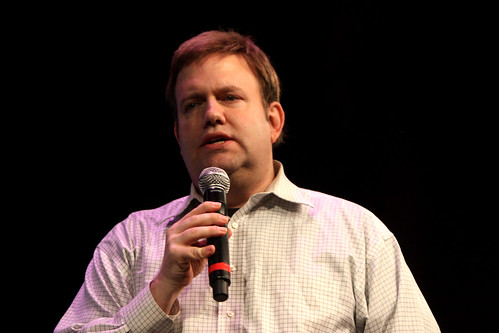 ORLANDO, Fla. -- The Republican Governors Association met this week in Florida to give GOP state executives a chance to rejuvenate, strategize and team-build. But during a plenary session on Wednesday, one question kept coming up: How can Republicans do a better job of talking about Occupy Wall Street?

"I'm so scared of this anti-Wall Street effort. I'm frightened to death," said Frank Luntz, a Republican strategist and one of the nation's foremost experts on crafting the perfect political message. "They're having an impact on what the American people think of capitalism."

Luntz offered tips on how Republicans could discuss the grievances of the Occupiers, and help the governors better handle all these new questions from constituents about "income inequality" and "paying your fair share."

Yahoo News sat in on the session, and counted 10 do's and don'ts from Luntz covering how Republicans should fight back by changing the way they discuss the movement.

"I'm trying to get that word removed and we're replacing it with either 'economic freedom' or 'free market,' " Luntz said. "The public . . . still prefers capitalism to socialism, but they think capitalism is immoral. And if we're seen as defenders of quote, Wall Street, end quote, we've got a problem."

3. Republicans should forget about winning the battle over the 'middle class.' Call them 'hardworking taxpayers.'

"Everyone in this room talks about 'jobs,'" Luntz said. "Watch this."

He then asked everyone to raise their hand if they want a "job." Few hands went up. Then he asked who wants a "career." Almost every hand was raised.

"So why are we talking about jobs?"

"It's not about 'government spending.' It's about 'waste.' That's what makes people angry."

6. Don't ever say you're willing to 'compromise.'

7. The three most important words you can say to an Occupier: 'I get it.'

Then, he instructed, offer Republican solutions to the problem.

Use the phrases "small business owners" and "job creators" instead of "entrepreneurs" and "innovators."

9. Don't ever ask anyone to 'sacrifice.'

"There isn't an American today in November of 2011 who doesn't think they've already sacrificed. If you tell them you want them to 'sacrifice,' they're going to be be pretty angry at you. You talk about how 'we're all in this together.' We either succeed together or we fail together."

Tell them, "You shouldn't be occupying Wall Street, you should be occupying Washington. You should occupy the White House because it's the policies over the past few years that have created this problem."

Luntz advised that if they give their employees an income boost during the holiday season, they should never refer to it as a "bonus."

"If you give out a bonus at a time of financial hardship, you're going to make people angry. It's 'pay for performance.'"