Looking for more ways to make Wall Street pay? Many of you recently received the following email, which plugs you into three new campaigns holding Wall Street accountable. Check them out: 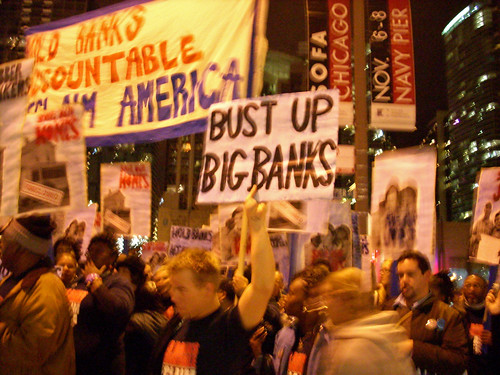 It's been a busy and exciting two weeks. We've seen extraordinary actions in every corner of the country aimed at holding Wall Street accountable for the damage they've done to our economy.

People across the country have pledged to close more than 80,000 accounts at the big Wall Street banks in coordination with last week's nationwide "Make Wall Street Pay" day of action—which included more than 250 local rallies, marches, and actions.

Thousands of people have already started planning even more great actions and this week American Dream Movement volunteers hosted hundreds of local "How the 1% Crashed the Economy" teach-ins.

Now we've got to keep the pressure on Wall Street going. If you want to stay involved, organize with others, and do more to hold Wall Street accountable, here are several powerful new campaigns you can plug into:

1. Move Our Money: Join the new nationwide campaign from our friends at The New Bottom Line. You can report back how much money you've moved from the big banks and then join a local campaign to get city government, churches, schools, and other institutions in your area to move their money out of the big Wall Street banks.

3. Banxodus: The Progressive Change Campaign Committee (PCCC) has created Banxodus, a crowd-sourced bank research site that gives you the tools to find a better bank.

And, of course, don't forget to find or start an event near you on November 17th—a mass day of action where we demand jobs and justice from our government.

We hope you can help continue the fight to bring America back into the hands of the 99%.

Thank you for being a part of, and believing in, this movement.