Last night Van Jones spoke about the American Dream Movement to a crowd of students at Harvard University. Sarah Coughlon live-blogged the event, “Rebuild The Dream: The Next American Economy,” on Harvard Political Review's website. Check out some highlights: 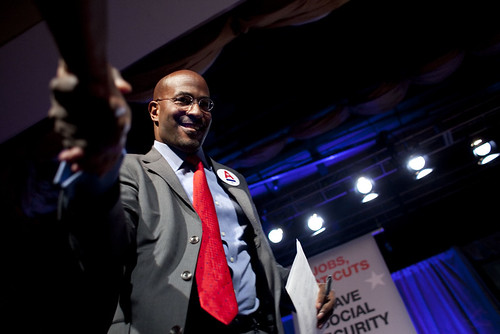 6:10 Jones is moving away from his “normal canned speech” to talk about the influence of the Occupy movement. He says that these are victims of the recession whom no one has been talking about, and he credit the protests for moving the dialogue in that direction.

6:12 The protests “are a judgment” against an establishment that has been promising that things will get better when they never do. The protestors “are feeling abandoned not just by Wall Street, but by the political class. And that’s us.”

6:17 Jones says that the Tea Party was “a remarkable exercise in people-powered politics.” He points out that the “Contract From America” (the Tea Party’s policy statement) was edited by 50,000 people as a wiki. “It’s an open-source brand”: you can’t go to Tea Party headquarters and talk to the president of the Tea Party.

6:23 Jones says that there are two threats to liberty, and that our generation’s fight needs to be to address them both. One is excessive concentrations of political authority (totalitarianism), and the other is excessive concentrations of economic power. “They say ‘Obama is a socialist’, but what if it’s the other way around? What if Citizens United, and this idea that corporations are people, is the real threat to liberty?”

6:29 He says that those who oppose the Occupy protests have a moral responsibility to explain how these people will live in the future. “The middle class in Asia, God bless ‘em, is getting bigger, but the middle class in the West is getting smaller.” He critiques those people who say that the Occupy protests aren’t being polished enough in their expression of legitimate frustration. I think this is one of the more fascinating issues about Occupy: do people who are unable to find work or pay for their student loans really need a full policy proposal to explain how we need to fix systemic inequality? Isn’t it enough that they’re raising these issues?