Highlights from The Take Back the American Dream Conference 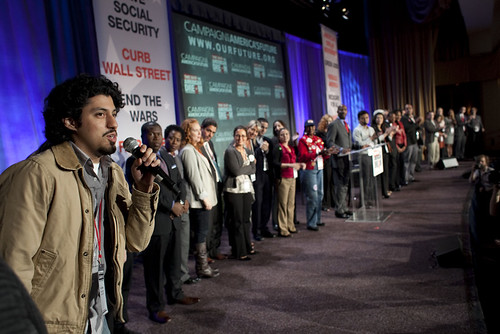 It's been a wild week. On Sunday, progressives from around the United States poured into Washington, DC for the Take Back the American Dream Conference, the first summit of the American Dream Movement. And by 9:00 Monday morning, the conference was in full swing. 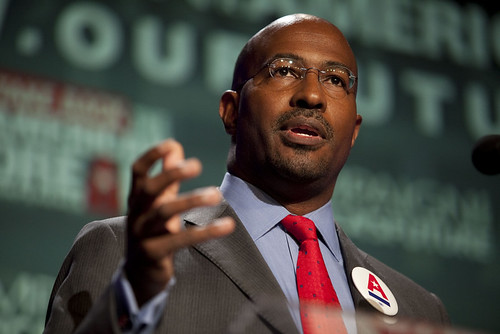 When asking conference attendees what caught their attention, the majority mentioned the moment when thirty leaders filed on to the stage one by one to to stand with Van and tell the audience how their own struggle fits in with the American Dream Movement. The thirty on stage were diverse in age, race, gender, cause, and religious faith, and many of the leaders openly teared up when they recognized just how many people stood beside them and behind them. Those in the audience were no different.Here's are some highlights of what transpired at Take Back the American Dream 2011.1) Monday, October 3 plenary, featuring Van Jones, Rep. Jan Schakowsky, Robert Reich, Billy Wimsatt, and Allison Johnson:2) Tuesday, October 4 plenary, featuring Richard Trumka, Justin Ruben, Erica Williams, Joel Silberman, Ai-Jen Poo, Liz Butler, and Mary Kay Henry:CBS News had this to say about the newfound focus of conference attendees:

A coalition of liberal organizations are planning to push for a liberal agenda and recruit progressive politicians at every level of government -- with or without President Obama.Taking hold of the momentum generated by the "Occupy Wall Street" protests occurring across the country, the liberal leaders have drafted plans to implement what they call an "American Autumn" -- a realignment of American politics inspired by the pro-democracy protests in the Middle East dubbed the "Arab Spring."Gathered in Washington for an annual progressive conference -- this year called the "Take Back the American Dream" conference - the leaders said that liberals this year have a new-found sense of energy and enthusiasm."People are moving, they are moving on their own," said Robert Borosage co-director of the Campaign for America's Future. "They understand the need for action."

3) And on Wednesday, the highlight of the day was a big "Jobs Not Cuts" rally on Capitol Hill. Van Jones emceed the rally, sharing the stage with fourteen wonderful fellow Americans, including an emergency room nurse, President of the Professional Firefighters of Wisconsin Marlon Mitchell, a jobless worker from Pittsburgh, and Representatives Keith Ellison, Raul Grijalva, and Sheila Jackson Lee. Perhaps the most moving speech came from unemployed home caregiver Linda Evans, whose voice quivered from despair to anger as she wept, crying out to Congress, "How can you sleep at night? How can you sleep knowing that people in the District of Columbia are hungry, living at a poverty level?"You can watch highlights of the Wednesday rally here:After the rally, dozens of unemployed workers delivered job applications to supercommittee members to make sure that they focused on job creation instead of cutting key programs.The flurry of conversation and inspiration this week wasn't the start of the American Dream Movement, which got its initial spark from the stand in Wisconsin in the spring of 2011. And it most certainly isn't the end - protests, marches, and creative direct actions will only increase throughout the fall, culminating in a wave of action on November 17. And as those actions increase, the movement will continue to set its roots deeper, engaging one million leaders across the country and recruiting over two thousand progressive candidates from the school board on up. We're only just getting started.Read here about what's next for the American Dream Movement.For a full look at our coverage of the Take Back the American Dream Conference on the blog, we've got it all in one spot right here.