Senator Jon Kyl (R-AZ) has set the tone for debates that will ensue this week in Congress over extending the Social Security payroll tax. Kyl incorrectly argues that the tax, which would increase taxes for the typical family by around $1000 a year, will halt job creation. As Robert Reich has clarified previously, the idea that taxing the extremely wealthy will stifle job creation is a false, conservative myth. Read the following article for the progressive response: 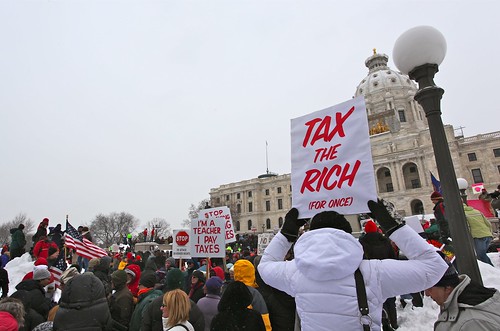 The No. 2 Senate Republican, Jon Kyl, expressed concern on Sunday about President Obama’s proposal to continue a reduction in the Social Security payroll tax and questioned whether the tax cut had fostered the creation of jobs, as Democrats say.

Mr. Kyl’s comments offered a preview of a fight looming in the Senate, which plans to vote this week on the proposal to extend the payroll tax “holiday” enacted last December.

A one-year extension would cost more than $110 billion, the Congressional Budget Office estimates. Senate Democrats want to offset the cost by increasing the tax on income over $1 million a year.

Mr. Obama says that if Congress does not extend the tax cut, “the typical family’s taxes will go up $1,000 next year.” As a result, he said, consumers will spend less, businesses will sell less and hire fewer workers, and the economy will suffer.

But on “Fox News Sunday,” Mr. Kyl, of Arizona, said: “The payroll tax holiday has not stimulated job creation. We don’t think that is a good way to do it.”

Moreover, Mr. Kyl said, increasing taxes on the most affluent Americans, including small-business owners who report business income on their personal tax returns, would undermine the fragile economic recovery.

“The best way to hurt economic growth is to impose more taxes on the people who do the hiring,” Mr. Kyl said. “As a result, the Republicans have said, ‘Don’t raise the existing tax rates on those who do the hiring.’ ”

Democrats reject that argument and say that increased taxes on high-income people are justified at a time of growing income inequality...

Visit the New York Times for the full article.