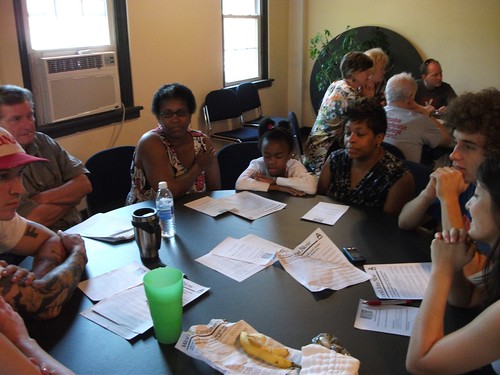 Over the weekend, over 25,000 of you met in nearly 1600 living rooms across America to share your stories and to discuss the next steps toward taking back the American Dream. You held meetings in every single one of the four hundred thirty-five congressional districts in this country. From Missoula, Montana to Midtown Manhattan, from Santa Monica, California to Van Jones' hometown of Jackson, TN, many of you showed up for the very first time to engage in politics.That's huge!By comparison, the Tea Party held only 800 meetings on its first organized day in April 2009. And that was with a full on blast of two months of promotion by Fox News. You organized your meetings strictly through e-mails from our partner organizations, word of mouth, and the good will of all the great hosts out there to open up your homes - no national cable news network necessary.And while the numbers are impressive, that alone wouldn't have been important if you hadn't shown up ready to work on the hard task of reclaiming the American Dream for ALL of us. At the meetings, people introduced themselves, shared what was personally important about the American Dream to them, and then picked which of the top rated 40 ideas in the crowdsourced Contract for the American Dream (you can see for yourself which ideas made the top 40 at the Contract website.) This feedback will be instrumental in deciding which ideas will go into the final draft of the Contract for the American Dream.Looking at the response from the meetings in e-mails and on social media, most people were thrilled to fight back for a change. Many of you were surprised at the number of like-minded individuals who showed up on a beautiful summer weekend. And even given the huge upswell in political participation since 2004, many of you reported that this was your first time to engage in any political activity beyond voting in your entire life.All of this is hugely important. We already know that at a baseline, we're incredibly strong - 150,000 rallied in a single day in Wisconsin, thousands have rallied in the last few months even in places like Utah and Montana. But if we're going to change the conversation from cuts back to jobs, if we're going to stop the corporate takeover of our political process, if we're going to make sure that we have healthy, thriving communities, and if we're going to make sure that those who do well in America do right by America, we need to have as many people as possible involved and on the ground and focused on the task at hand to make it happen.So many of you meeting all over the country was a huge step, but these first Rebuild the Dream house meetings were only just the first of many steps on the way to regaining the American Dream. More to come in the next following days - stay tuned!