Today marks the launch of the RESTORE the American Dream Act for the 99%, a bill by the Congressional Progressive Caucus that actually tries to find real solutions to our economic crisis. How? By incorporating 9 out of 10 of the solutions over 130,000 of you came up with in the Contract for the American Dream. While we know this bill may not pass right away, we see it as a turning point - Congress must decide if they want to perpetuate our problems, or find real solutions. Show Congress which side you're on:(Click here to see more specifics about the bill.) 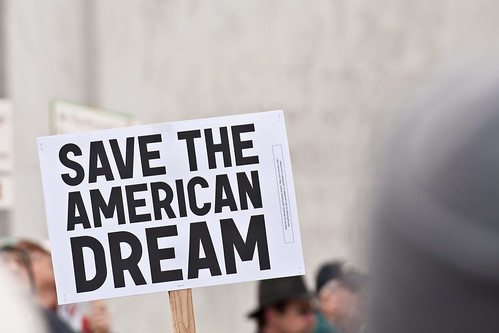 Dear Members,I want you to endorse a bill in Congress that won't pass anytime soon.I know that sounds odd. But right now Congress is so broken that any talk of real solutions is painfully rare and gets steamrolled quickly.Today is a turning point. This morning the Congressional Progressive Caucus introduced the RESTORE the American Dream Act for the 99%.This bill is exciting and refreshing: it is a real plan to fix the economy.This is our chance to shift the debate in Washington. It's up to us to stand with the few brave leaders in Congress who are willing to push for the "unrealistic" ideas. The truth is these are common sense, workable solutions that should be no-brainers. Let's force anyone in Congress who stands in the way to explain why—or get out of the way.Will you show your support?Click here to endorse the RESTORE the American Dream for the 99% Act.The bill has great ideas in it. And no wonder, because the ideas came from you! This bill is based on the Contract for the American Dream—a plan for turning our economy around crafted by more than 130,000 of us and endorsed by 300,000. Amazingly, this bill includes nine out of the ten points of the Contract for the American Dream.Key highlights from the bill: [1]

You probably know someone who can't find a job, or who is facing foreclosure, or who has gone broke due to illness. We all know people who are struggling, because people are struggling everywhere. For far too long, this reality has been sidelined from the conversation in Congress.Now it's time to flip the script.Click here to endorse the RESTORE the American Dream for the 99% Act.Thanks for all you do.–Natalie, Van, Billy, Jim, Ian, Somer, and the rest of the Rebuild the Dream teamBecome a fan on FacebookFollow us on TwitterSource:1. More information about the Restore the American Dream for the 99% Act, from the Congressional Progressive Caucus website:http://cpc.grijalva.house.gov/index.cfm?sectionid=80&parentid=5&sectiontree=5,80&itemid=497