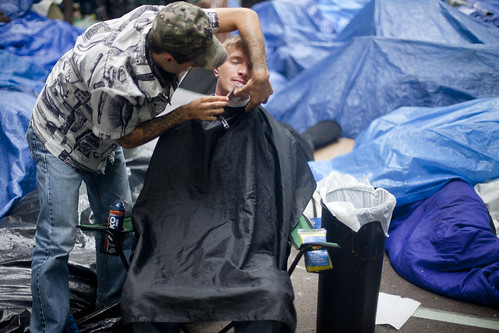 Mayor Michael Bloomberg is trying to shut down Occupy Wall Street, and we've got to stop him. We need to show Bloomberg that there's a national groundswell of support for Occupy Wall Street's right of assembly, guaranteed under the First Amendment of the US Constitution.There's a few different relatively easy things you can do to help out, and I urge you to do all of them if you live in the New York area.

Here's the context. Just a few days ago, Bloomberg announced that the Occupy Wall Street protesters' rights to free speech and assembly would be guaranteed, and that the protesters would be allowed to remain in Zuccotti Park as long as they liked. Now Bloomberg is changing his tune. He decreed late last night that the protestors would be evicted while the city "cleaned" the park. No evidence has been provided that the park has been harmed by the protesters, and Bloomberg has thus far refused to recognize that Occupy Wall Street already has a functioning sanitation detail, just as they've self-organized every other aspect of the occupation. (They even have a working library.)Bloomberg also "guaranteed" that protesters would be allowed to return to the park after it had been cleaned, as long as they follow the "rules". But reading the fine print, the new rules prevent the protesters from bringing tents, tarps, sleeping bags, and from "lying down." In other words, they could theoretically sleep standing up without any sort of shelter as the temperature drops and the fall rains pour down. Protesters rightfully recognize this move as a "de facto eviction notice".It's worth mentioning at this point that not only does Mayor Bloomberg's girlfriend sit on the board of the public-private partnership that manages Zuccotti Park, she's also a well known investment banker who sits on the board of financial giant Citigroup. Bloomberg himself is a multibillionaire. There's no question that between the rights of Occupy Wall Street and the comfortable privilege of the titans of finance, Bloomberg's allegiances are with the latter.But Bloomberg is still an elected official who has to respond to the opinions of the people he's supposed to represent. If we all stand with the brave occupiers, we can change his tune once again.