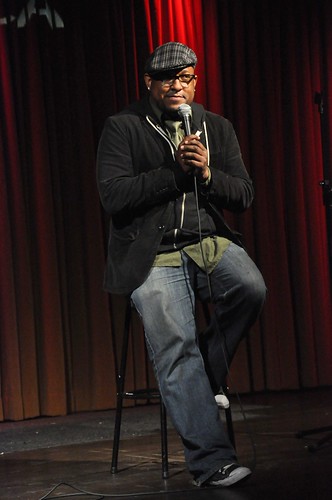 Monday night at this years' "Take Back America Conference" is sure to deliver fresh insight, inspiration and even laughs. Comedian Elon James White is one of the many incredible speakers slated for day one of the conference that you won’t want to miss.For White, social and economic justice is no laughing matter. Praised as "the perfect comedian for the Obama era, talking race while exploding racial stereotypes" in Politico, White continues to win accolades from critics, academia and audiences alike.The Brooklyn-based comedian is writer and host of the award-winning web series, This Week in Blackness - a satirical look at race, politics and pop culture in a so-called “post-racial” America.White’s commentary on race and politics has been featured on CNN.com, ComedyCentral.com, Daily Kos, Newsweek, the New York Observer, New York Post and Huffington Post. And in 2009 he was also the recipient of four Black Weblog Awards including Best Humor Blog, Best MicroBlog (Twitter), Best Video Blog and Blog of the Year. In April, White presented “How Comedy and SatireCan Help Reform the Media” during the National Conference for Media Reform and was one of the keynote speakers for the conference along with Amy Goodman.White will close out Monday’s plenary speeches at 4:30pm with a session on comedy and activism titled, “Using Humor to Pierce the Punditry’s Drone” - and the funnyman definitely practices what he preaches.This summer, along with Cheryl Contee, he infiltrated the Right Online conference masquerading as a black conservative. The resulting piece, “INCOGNEGRO: Undercover as Black Conservatives at Right Online During Netroots Nation” is chocked-full of hilarious insights and near-misses as the duo delves deeper into conservative mind space.  The fact that the two entered the conference as “special guests of Michelle Bachmann” alone is enough to warrant at least a few chuckles.White will most certainly deliver his unique brand of witticism to Take Back America 2011 and should leave us all with plenty to think about.Catch him at the conference, Monday October 3 at 4:30pm and again during the “Laughing Liberally” comedy show at 8pm. For more info on attending the conference, click here.[For those who can’t make it in person – don’t worry, we’ll live stream the conference right here at www.rebuildthedream.com]