Let's build on today's Save the American Dream rallies 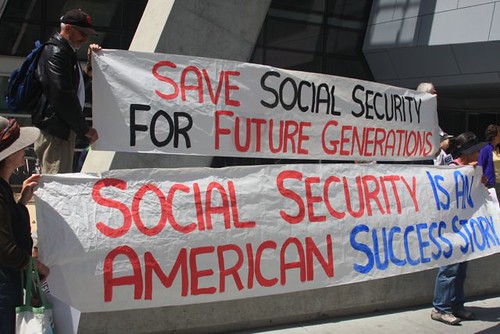 The phone calls have already been pouring in, but even with today's success, we really need to keep the momentum rolling with phone calls to your representatives to make it clear that that Social Security and Medicare should not be sacrificed to save big tax cuts for the wealthy. The number for the US Capitol switchboard is (202) 224-3121 if you haven't called already. Ask what your representative's position is, and if they pledge to oppose cuts, thank them. If they want to force cuts in order to make a budget deal, or they're not sure, tell them very firmly (but politely) where you stand. On a normal day, even in tense times such as these, congressional district offices do not get a whole lot of visitors. They are generally located in quiet, out of the way places in strip malls, office parks, and small high-rise buildings. But today, thousands of Americans across the country said enough is enough. The people of this country are sick of their representatives in Washington playing games while millions still suffer without jobs. They're sick of politicians who will never have to worry about paying for retirement going after the American people's pension plan and retirement health insurance, Social Security and Medicare, while they give even more tax breaks to the superrich and forcing the American government to the brink of default to get their way.I knew today was going to be big when my friend Cara e-mailed to tell me that "my mother called last night to tell me that she is going at noon to the protest at Rep Tom Reed's office [in New York State]. My mother. She has never been to a protest and has never been plugged into the activist community." Of all the crises that have occurred in this country over the last few decades of her mother's life, the urgency of threatened cuts to some of the most vital supports for the middle class compelled her to show up today.Here's just a sample of what happened today, because I couldn't possibly cover 435 events in a single blog post:Ohioans protested against Rep. Steve Stivers' insistence on cutting vital programs like Medicaid before he would agree to keep the government out of default. They made their way in to talk to his office staff, and in a powerful moment, one woman shared her the story of her father, who in an emergency had to turn to Medicaid (which he qualified for) after his private insurance cut him off. Watch the video: In New York, over 50 protestors eventually met with the staff of Republican Nan Hayworth, but not before her office tried to shoo them away by calling the police. In California, 70 people showed up at Republican Brian Bilbray's office, eventually getting a meeting with his aides outside. 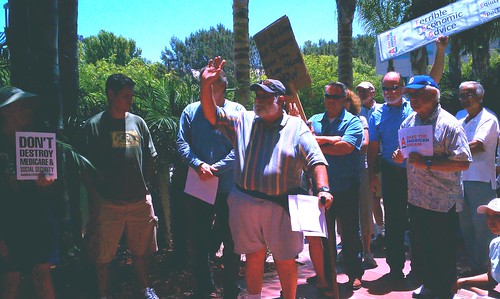 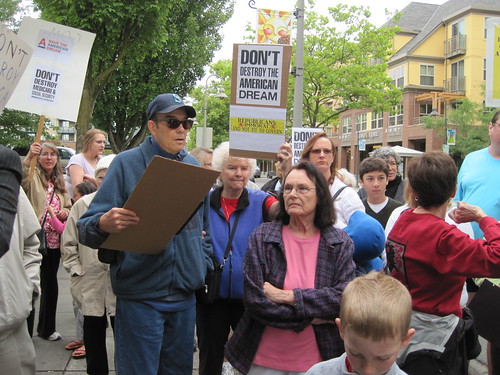 In Pennsylvania, an estimated 80 people showed up at Republican Mike Fitzpatrick's office. They were so fired up about the turnout that they decided to meet up tonight to talk about what else they could do to make sure Social Security wouldn't be sacrificed to the whims of Tea Party Republicans. In New Hampshire, protests in front of Republican Charlie Bass' office spilled out next to a sidewalk cafe, where one Newt Gingrich was having his lunch. 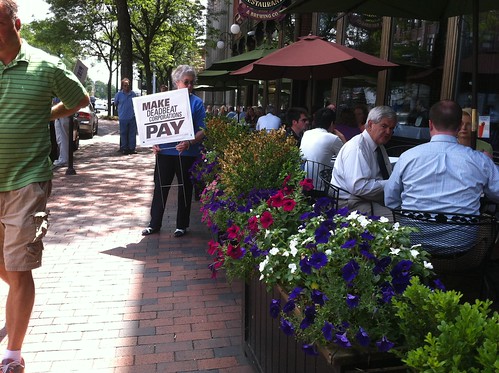 In Arizona, 40+ protestors braved 106 degree heat outside Republican David Schweikert's Scottsdale office to ask him to raise the debt ceiling with clean vote instead of targeting Social Security and Medicare. One of the younger attendees held up a sign with hope for their own future: 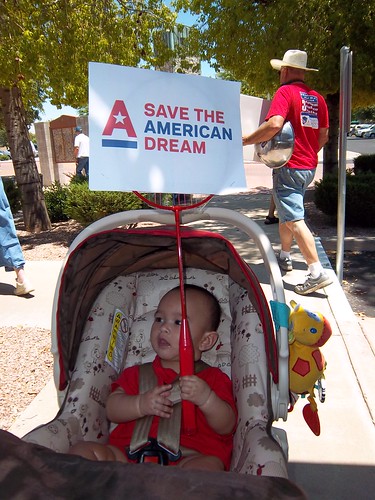 And people coming out to defend Social Security didn't just target the offices of Republicans, or Democrats on the fence. In Missouri, they showed up at both local district offices to thank Emmanuel Cleaver and his staff for proudly signing the CPC letter defending against cuts. In New York, they showed up to thank Jerry Nadler. In Houston, TX, they visited with the staff of Sheila Jackson Lee. In Georgia, dozens showed up to ask Hank Johnson to be even more visible in demanding that the rich pay their fair share. And so on across the country.Watch out for more updates on what happened today, as well as how you can get involved in the coming days!