Nelson Schwartz reports that after inciting national outrage, Bank of America and other big banks like Chase and Wells Fargo are thinking twice about exorbitant debit card fees. But that doesn't mean we shouldn't move our money: 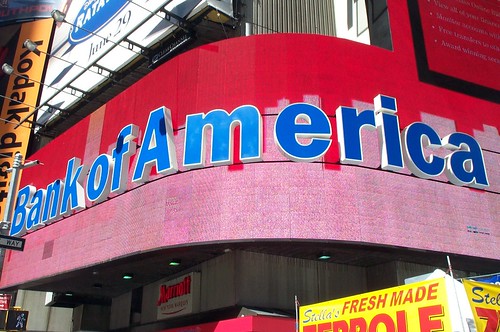 "Although bank officials said their thinking was “evolving” and no firm conclusions had been reached, the bank is likely to broaden the number of customers exempt from the fee. Customers who hold Bank of America credit cards, directly deposit wages into the bank or hold a minimum balance will not be charged under a new plan. Previously, the bank said the minimum balance required to avoid the fee was $20,000, but lowering that minimum is also possible.

The hesitation at Bank of America comes as other banks are also pulling back, at least for now. Wells Fargo said Friday that it was canceling a test that would have imposed a $3-a-month charge on debit card holders in Georgia, Nevada, New Mexico, Washington and Oregon. JPMorgan Chase, which was testing a $3-a-month charge, has decided it will not impose a stand-alone debit card use fee, a person briefed on the situation said.

...Despite the apparent change of heart, banks are likely to continue to find ways to make up for billions in lost revenue because of new federal regulations that sharply reduce the fees paid to the banks by merchants when consumers use debit cards. At the same time, other bank businesses, like lending and sales and trading, have been anemic."