This month, Rebuild the Dream is taking a look at a few of the amazing ways people in our communities are coming together to create local economies that empower the 99%.We call these initiatives the American Dream 2.0 because they are providing a totally revamped way to look at our values as a nation as well as our role in creating the world we want to live in.In part 2 of the American Dream 2.0 series, we take a closer look at worker-owned cooperatives -- businesses owned and operated by the workers. While there are several models for ownership and management of worker cooperatives, the essential question is whether they can prove to be a viable solution to joblessness and economic disparity.It’s not so far-fetched. In fact, it’s already happened.The Mondragon Cooperative Corporation in the Basque region of Spain did just that in the 50s. After the Spanish Civil War, Father Jose Maria Arizmendiarriata organized impoverished Basque peasants into a coop that manufactured paraffin stoves. Mondragon has since grown to include 120 workplaces, a bank, a chain of supermarkets and a university – all cooperatively owned and run by employees.

The MCC is now considered the most successful example of worker-owned enterprise in the world and is mentoring projects like the Evergreen Cooperative Laundry in Cleveland, Ohio. The laundry co-op is 100%-owned by 50 workers who, after seven years on the job, will have each built an ownership stake of as much as $65,000. 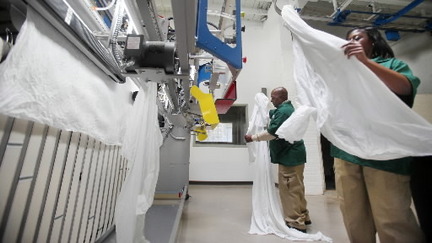 The Evergreen Laundry Cooperative and similar projects are all part of a growing effort to transform the quality of life for low- and moderate-income communities across the country.It’s the reason Omar Freilla returned to his old neighborhood in the South Bronx in the 90s. He wanted to create a South Bronx that is greener, healthier and more economically empowered than the South Bronx he grew up in. To do that, he established Green Worker Cooperatives – an organization that provides training and support to residents starting worker-owned green businesses.The South Bronx, in addition to being one of New York’s working class communities, has also become a dumping ground for all types of dirty industry and infrastructure -- coal plants, landfills and hazardous waste treatment facilities. Because it is located along a heavily trafficked highway, asthma rates in the South Bronx are twelve times the national average. Moreover, access to healthy food, quality education and affordable health care is limited.The Green Worker Cooperatives model says that if you establish more worker-owned green businesses in areas like the South Bronx, then you can build a strong local economy and break the cycle of poverty by keeping community money within the community. And by establishing worker-owned health co-ops or businesses that do things like turning trash into valuable compost for resale, you create wealth and wellness that doesn’t depend on resources from outside of the community.But if worker-owned cooperatives can create jobs and pave the way to a truly democratic economy, why aren’t there more of them?According to Quentin Sankofa of the Mandela Food Cooperative it comes down to money.“It is not an easy thing for low income people of color to start a business, let alone a cooperative.” Sankofa says, “No banks or credit unions wanted to lend us money.”

Sankofa is one of seven members of the Mandela Food Cooperative which is the only grocery store in West Oakland, CA. Because of the lack of access to fresh food and produce, West Oakland is classified as an urban food desert. But thanks to funding and support from the non-profit Mandela Marketplace, the co-op is now providing fresh fruit and vegetables which are delivered daily by youth to small grocery and liquor stores in the area.But are grants from foundations and non-profits a truly sustainable resource for people seeking funding? They can help some, but can they provide enough capital to transform communities which have suffered socially and economically for centuries?While we can’t provide all the answers in a blog, we can say that there are some groups that are finding some pretty innovative ways to raise money for their cooperatives without bank loans. The Alchemy Co-op in Melrose, MA raised over $10,000 to start their organic food co-op through online crowd-funding.Have an interest in starting your own worker-owned coop? Here are a few resources we've put together to help you get started:Crowd-Sourced FundraisingKickstarter.com – online crowd-sourced fundraising site which uses an all-or-nothing model to raise money for projects -- if you set your fundraising goal at $10,000 and raise $9,999, you don’t get any of itIndiegogo.com – online crowd-sourced fundraising site where you pay a fee but keep all the money you raiseFundingWorker Cooperative Federal Credit Union – a credit union in its start-up phase whose sole purpose is financing worker cooperatives.Worker Ownership Fund – national organization to increase access to funding for start-up and existing worker-owned cooperativesTrainingGreen Worker Cooperatives’ Coop Academy -- an intensive 16-week training and support program that helps teams of aspiring entrepreneurs develop worker-owned green businesses.Do It Yourself ResourcesConverting your Business to a CoopSteps to Starting a Worker CoopWorker Cooperative ToolboxAmerican Worker Coops Startup Guides