11 Million Vs the Fiscal Cliff

ARTSTRIKE on Dec 19 was bigger than we ever imagined. Not only did talented artists create powerful work exposing the misleading ideas dominating the budget debate... we were able to reach 11 million people with their work.

11 million! More on how it happened below, but the biggest "wow" moment for us was seeing things like this: 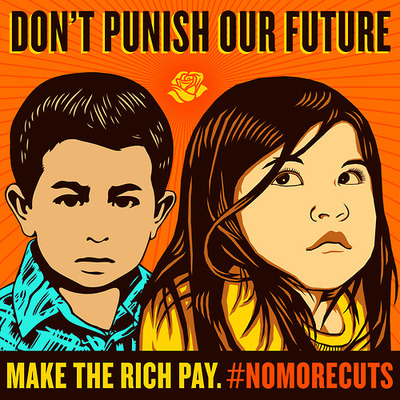 When artist Ernesto Yerena's piece was featured on CNN.com, we knew ARTSTRIKE was working.

Here's what happened on Wednesday:

To put it in context: The New York Times daily circulation is only 1.5 million!ARTSTRIKE started when Rebuild the Dream Innovation Fund partnered with artist organizations CultureStrike and 5D Stories to change the conversation around the so-called "fiscal cliff." With big banks, big oil, and tax-dodging corporations setting the agenda, we knew statistics and arguments would only take us so far.

Thanks to dozens of extraordinary artists and tens of thousands of Rebuild the Dream Innovation Fund members and allies, we put a progressive message in front of millions on Wednesday. This won't be the last time we partner with culture-makers on projects like this. If you want to help make more of this possible, you can chip in here.