How to find your local district office

Here's a quick walkthrough of how to find the closest congressional district office for your representative on Congress.org. Click here to begin.Enter your ZIP code.

WalMart has announced plans to open four WalMart stores in the Washington D.C. area, which will undercut local businesses and give locals jobs that pay below the poverty line. In response, Respect DC, a local coalition of clergy, workers, students, and environmentalists, has asked WalMart to sign an enforceable community benefits agreement that would guarantee living wage jobs with decent health and retirement options, dignified treatment for its workers, and investment in raising the standard of living in the community.Now, WalMart is a massive corporate behemoth with a practically infinite amount of cash that they can throw at local politicians and newspaper advertising. In order to counter WalMart's massive resource advantage, Respect DC has to get a little creative. And they hit a home run with this example, a flashmob complete with brass band accompaniment and choreographed dancers. Watch it:

Those of you who attended our house meetings heard a message from an Army reservist named Tiffany. (For those of you who did not make it to a meeting, you can listen to the recording here.)Tiffany is a lot like most of us. She's doing everything she is supposed to do, and then some. She's married, has two kids, has worked a long time in the same field, in her case, as an executive administrative assistant. With her fifteen years of experience, she knows how to do her job very well. Unlike most of us, Tiffany's gone above and beyond to serve her country, having signed on twice as an Army reservist and gone overseas multiple times with one long-term deployment.*But Tiffany is still struggling, because she can't find steady work. There are a lot of people looking for a job in her field, and very few people hiring. And her distinction as a reservist, which should be a badge of honor, has turned instead into a black mark on her record. Legally, employers cannot consider her status as a reservist to either deny her a job or to let her go, but after being passed over multiple times, she had to start asking around whether or not this might be a problem. Her fears were confirmed by several friends at companies similar to the ones she had been applying to. (Reservists are experiencing a whopping 14% unemployment rate, well above the 9.2% national rate.)For Tiffany, her own struggle has cast the nation's economic slump into high relief. She's done everything right, yet she's contemplating leaving her own well-paying field after building up years of experience and skills because she can't find work. She has met and read about others in her own situation, and thinking about the ever growing pressure of unemployment and underemployment has spurred her to get involved.TIffany told me that she was incredibly inspired by the house meeting that she hosted last weekend. "The conversations were SO powerful," she said. "We really don't understand how much we all need each other until we talk to one another."What Tiffany hopes for the future is that Rebuild the Dream keeps growing, that people across the country realize that we really need to make something happen in order to turn things around. She is continually shocked at how little politicians seem to care about how poorly regular people are doing in this country and hopes that politicians and regular people alike will wake up and realize that this is all about something "much bigger than me".*Tiffany wrote to correct me on her deployment. She only deployed overseas once, although she did have to make several shorter trips overseas as part of her service.

It's not often that you hear "Honolulu" and "protest" in the same sentence. But today in Honolulu, hotel workers and supportive members of the community pulled up beds outside the Hyatt Regency Waikiki Beach Resort to protest work conditions and low pay. Workers joined members of their union, Unite Here, across the country to fight Hyatt's tactics of hiring low-paid temporary workers to replace union workers and forcing the remaining workers to do twice the work.In Boston, Hyatt workers protested against the firing of the "Hyatt 100", a hundred members of staff who were in many cases unwittingly trained their much lower-paid replacements, having been told that they were training temporary workers who would fill in when staff went on "vacation." Little did they know that they were the ones going on a permanent vacation.In Chicago, Hyatt actually turned up the heat lamps outside the hotel - in 95 degree weather, mind you - to sweat out the picketing workers. It only served to make them even angrier. The workers extended the picket line beyond the reach of the heat lamps to avoid totally dehydrating in the sweltering summer heat.When you hear the amount of work that these workers do, it's almost impossible to believe that Hyatt wants to cut pay nearly in half and add to their workload. Listen to these housekeepers tell their story:

Zombies showed up at TVA headquarters in Chattanooga earlier today to protest the TVA's decision to spend $5 billion more on completion of the Bellefonte nuclear power plant. The TVA halted construction of the Hollywood, Alabama facility in 1988 after sinking $6 billion into the project, which has been labelled as a "nuclear Ford Pinto."Head organizer Sandy Kurtz said that protestors dressed up as zombies because "it's a zombie reactor. It's neither alive nor dead." He also worried that the TVA was spending an ungodly amount of money on an unsafe power plant with an outdated design, construction permit problems, and a location in a seismic area, when they could be spending the money on cleaner, safer forms of energy that would come online faster and create jobs that would be distributed around the state.The zombies made their way into the headquarters and delivered a petition to the TVA board to kill the power plant once and for all. 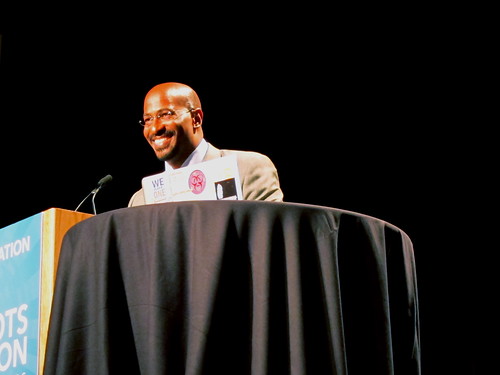 On the Tom Joyner Morning Show today, Van Jones chatted with Roland Martin and the rest of the TJMS crew about why Rebuild the Dream exists, how our house meetings went, and what our prospects for success really are.One of the more interesting ideas that Van talked about was the notion of a financial transaction tax, where Wall Street traders would pay a fraction of a percent per trade, not enough to discourage honest investment, but enough to keep "flash trading" and rampant speculation at bay. The tax would raise $50 to $100 billion per year.Listen here:

In case anyone was under the impression that our house meetings were only a place for Americans to share their feelings and go home satisfied, think again. Lots of you couldn't even wait for the looming August congressional recess to get started.For example, in Seattle, attendees of one meeting decided that they should go immediately to a congressional office to make their concerns about Washington's obsession with austerity known. Attendees affiliated with Working Washington and MoveOn Council Seattle went to the offices of Senator Patty Murray and Maria Cantwell, met with staff, and requested personal meetings with the senators when they get back to Washington State. They also have started developing a proposal to take action during the August recess and started networking with local groups like SEIU and Fight for a Fair Economy to see what they could do together.[caption id="attachment_371" align="aligncenter" width="320" caption="House meeting attendees file in to Sen. Patty Murray's office in Seattle."]

[/caption]We have lots more examples of similar initiative being shown by groups that formed from house meetings. Let us know what you are up to in your own area!

Wisconsin upset with Paul Ryan, too

You might have heard about Wisconsin Republican Paul Ryan's incident in Washington DC when he was observed drinking outrageously expensive wine after proposing cuts to Medicare, Medicaid and Social Security. The wine was more expensive than the wages a two-income family would earn on minimum wage in an entire week.USAction decided to show Rep. Ryan what his constituents think about the cuts. So they set up a wine tasting outside his Racine office and asked ordinary Wisconsinites to share their own stories about the effect the Ryan cuts would have.Watch the video:

Wisconsin, the place where people started fighting back against rightwing overreach, continues to show the way. On Monday, when Gov. Scott Walker made a public appearance at the opening of the Beloit Visitor Center, the majority of the crowd began chanting "Recall Walker" and singing "Na Na Hey Hey Kiss Him Goodbye". Watch the video:

Here's a time lapse video of the collapse of an ice sculpture titled "Morning in America," set to the stirring speech of Sen. Bernie Sanders as he filibustered the extension of the Bush tax cuts on the wealthy. It's both sad and beautiful.Watch it now:Thanks to MaggieRB002 for tweeting us the link!