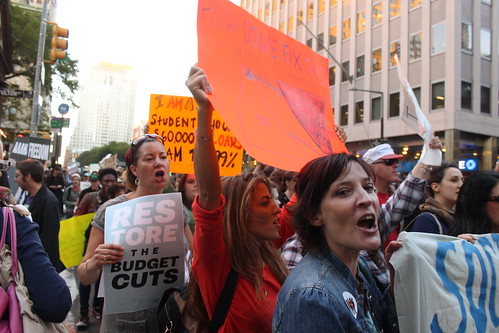 Occupy Wall Street's swirling energy is spreading out, reaching more and more people. A Rasmussen poll yesterday shows Occupy Wall Street is twice as popular as Congress! Check out this report from a community organizer in New York City, about his experience in the massive solidarity march yesterday. We are all the 99 percent.

Olivia and I originally started marching with 3 of our African American and West Indian members from tenant campaigns in Brooklyn. We got split up, and ran into Mimi, our Latina foreclosure member from Nassau County, and her 6 year old son. And as we marched with them, two Orthodox Jewish marchers on one side of me asked if I had spare signs, which I did. And to the right of us were a group of South Asian Muslim women from Jackson Heights, Queens. And we're all chanting "We! Are! The 99%!". So yeah, that's who the protestors were.

This is no longer just about college kids worried about finding a job to pay off their debt, or just about unions or any other single group or demographic. It’s much, much wider than that. There’s a real anger that Wall Street came out of the recession stronger and richer than ever, while the rest of us have slipped further down the ladder. And there’s also a real joy and sharing in recognizing that there are thousands, even millions of us that feel the same way.